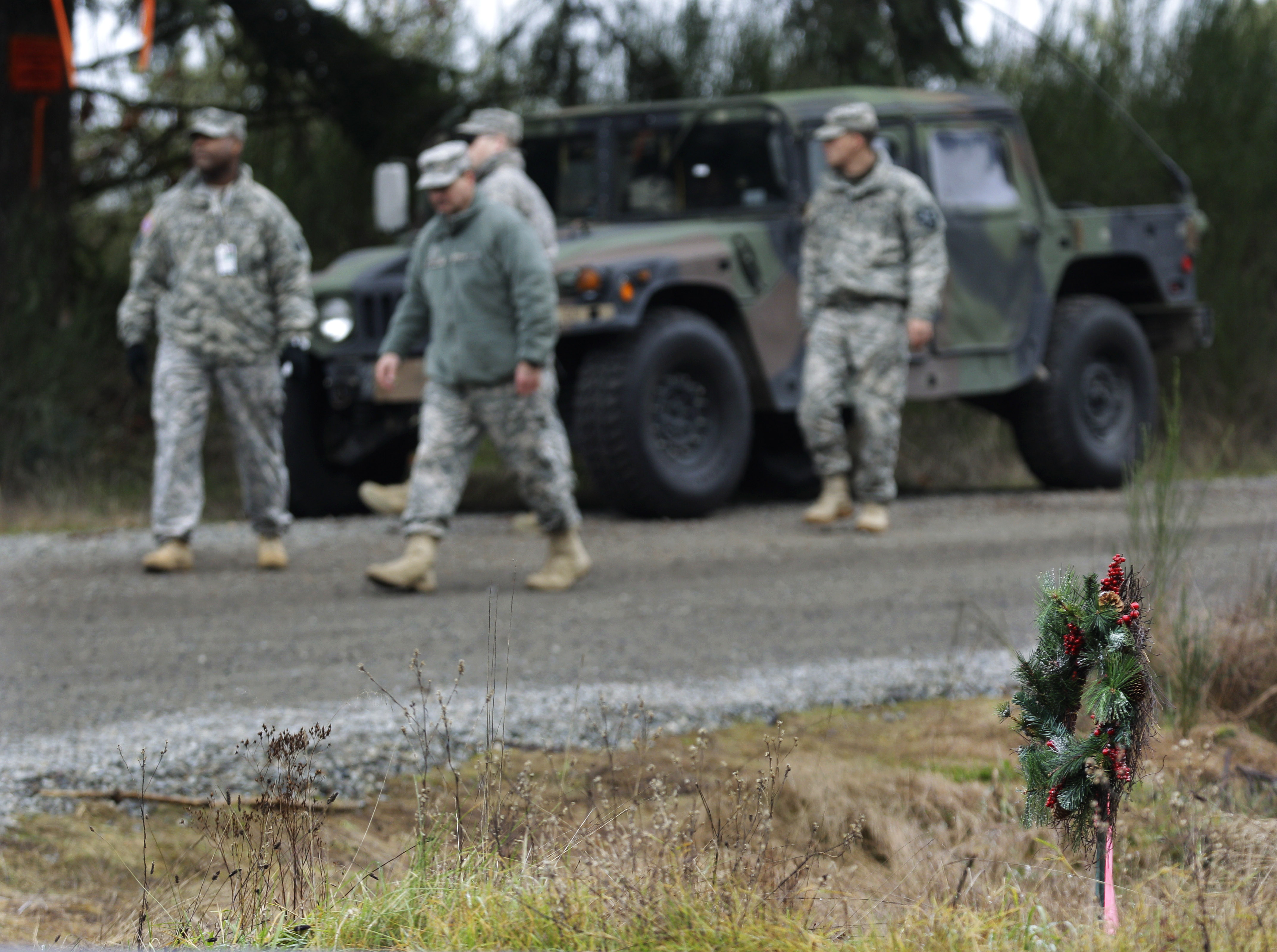 RAINIER, Wash. - A recent West Point grad, two aviators with extensive experience in Iraq and Afghanistan, and a man with a pregnant wife were killed when two helicopters crashed at a Washington state base, the Army said Wednesday as investigators tried to determine the cause of the collision.

Army officials said the airmen were on a routine night training flight in two reconnaissance choppers when they crashed after 8 p.m. Monday in the southwest training area of the sprawling Joint Base Lewis-McChord, killing all four on board. An investigation into the cause of the accident by a team from Fort Rucker, Ala., began Wednesday.

Among those killed was Chief Warrant Officer Lucas Daniel Sigfrid, 32, who went to high school and college in Minnesota and graduated from Champlin Park High School, in a suburb of Minneapolis.

Sigfrid's wife and Duclos' wife are both pregnant, Duclos told the newspaper.

"We were just talking last week ... about if we're going to have boys and they would grow up like us. We were just hellions," Duclos said.

Sigfrid's former high school wrestling coach, Bill Maresh, said he wrestled all four years of high school and wasn't a champion but was a good guy who was dedicated to the sport and his team.

While other wrestlers might quit after two years if they're not successful, Maresh said Sigfrid stuck with the program.

"He was just one of those guys who kept coming, and he fought as hard as he could all the time," Maresh told The Associated Press.

Chief Warrant Officer Frank A. Buoniconti, 36, of Colorado Springs, Colo., had served on active duty since July 1994, and arrived at the base in early November. He previously served at Fort Bragg, N.C., and the National Training Center, in Fort Irwin, Calif. He was deployed twice to Iraq and twice to Afghanistan. He was awarded the Distinguished Flying Cross.

Silvia Buoniconti of Colorado Springs, Colo., told The Colorado Springs Gazette that her son followed his father into the military. He joined up because "he felt it was the right thing to do," she said.

Capt. Anne M. Montgomery, 25, a native of North Dakota, had served on active duty since August 2008 and arrived at the Washington base a year ago. She was a 2008 graduate of the United States Military Academy and had not been deployed overseas.

But she did spend time overseas earlier in life, as the child of a humanitarian-worker father.

The eldest child of Kurt and Kathleen Rockeman was "bubbly" and "fun," and worked doggedly to get what she wanted, relatives told The Seattle Times.

After years of home schooling and time in private schools overseas while her father worked for U.S. Agency for International Development, Montgomery received an appointment to the U.S. Military Academy at West Point.

"To get an appointment to West Point was just out of this world. Her granddad, my dad, was a World War II veteran and was so proud of his service he was just floating on air when she got that appointment," said her uncle Keith Rockeman, of Grassy Butte, N.D. "She always had this dream of flying. My brother was a pilot, he was in the civil air patrol here in North Dakota. She inherited that love of flying from him."

Chief Warrant Officer Joseph S. Satterfield, 36, a native of Alaska, served on active duty since September 1997 and has been at the Washington base since December 2009. He had assignments in Korea and at Fort Campbell, Ky., and deployed once to Iraq and once to Afghanistan.

Joint Base Lewis-McChord is one of the largest bases in the country, with about 100,000 military and civilian personnel. In December 2006, a UH-60 Black Hawk helicopter from Fort Lewis crashed southeast of Seattle during a night training mission, killing all three aboard.