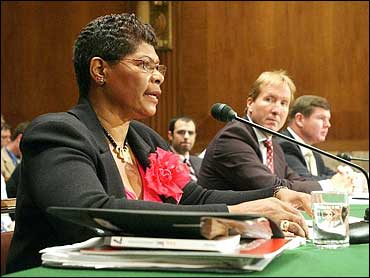 A high-ranking Army Corps of Engineers official who publicly criticized the Pentagon's decision to award Halliburton Co. a no-bid contract for work in Iraq has been demoted, officials said Monday.

Bunnatine H. Greenhouse, who had been the Corps of Engineers' top procurement official since 1997, was removed, effective Saturday, for what Corps of Engineers officials called a poor job performance. Her lawyer, however, said her removal constitutes "blatant discrimination" and violates an earlier agreement with the Army to suspend her demotion until "a sufficient record" pertaining to her complaints is complete.

"The failure to abide by prior commitments and the circumstances surrounding Ms. Greenhouse's removal are the hallmark of illegal retaliation," her attorney, Michael D. Kohn, wrote in the letter to Defense Secretary Donald H. Rumsfeld.

"Her removal will send a message to all concerned that if they dare stand up to corrupting influences within the Army contracting world their careers will be destroyed," he added.

Greenhouse was reassigned to a lesser job in the Corps of Engineers and removed from the Senior Executive Service, the top rank of civilian government employees.

Carol Sanders, a spokeswoman for the Corps of Engineers, said that as a matter of policy she could not comment on a personnel matter. She confirmed, however, that Greenhouse no longer holds the title of principal assistant responsible for contracting, which is the chief overseer of Corps of Engineer contracts. She also said that the Department of the Army is responsible for actions involving members of the Senior Executive Service.

Kris Kolesnik, executive director of the National Whistleblower Center, which is advising Greenhouse on contacts with members of Congress and the news media, said in an interview that Kohn was informed by the Pentagon's Inspector General's office that it is still preparing a report based on Greenhouse's allegations.

Greenhouse went public last year with her criticism of Iraq-related work awarded to Halliburton by the Corps of Engineers. Her main objection was the issuance to Halliburton subsidiary Kellogg, Brown & Root of a no-bid, five-year contract to restore Iraqi oil fields shortly before the Iraq war began in 2003.