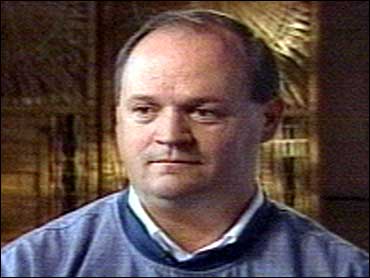 The U.S. Army knows some of its combat simulators are especially dangerous.

The Hoffman device causes more injuries than any other explosive simulator, according to a training video.

CBS News Correspondent Vince Gonzales reports the training systems attach to tanks and ground targets to simulate the flash and bang of real ammunition. They use an explosive known as the "Hoffman round."

The military usually blames Hoffman accidents on soldiers. So does Diehl, the German company that designed the round and one of the problem devices. Diehl was showing off its products at a recent Army trade show.

"There is a human factor, but I cannot tell you whether they were not trained or were just acting without the right precautions," says Diehl representative Bettina Ross.

That's "bull," says Rich Potter, who lost two-thirds of his hearing in simulator accident a decade ago.

"If I have my hearing aids in I can hear pretty well," says Potter.

Potter says the accident was not due to a mistake on his part.

"I wasn't doing anything," he says. "I just unplugged it, set it down, went to work on the target, and it went off."

The simulators are meant to be fired by a specific electronic signal, but vehicle hydraulics, static electricity, communications gear and even cell phones can accidentally set off the Hoffman rounds.

"Oh they're awful," says Potter. "They need to be gotten rid of before somebody gets killed."

According to hundreds of pages of confidential memos, e-mails, accident reports and databases obtained by CBS News, the U.S. Army has known about the safety problems for 20 years.

Among those documents is a timeline which reads:

2002: "121 soldiers have been injured by this device. And the number increases monthly ... If no action is taken, more soldiers will be unnecessarily injured."

"Accidents happen, that's why they're called accidents," says Potter. "But this is preventable, they can do something different."

The Army does plan to gradually replace the simulators with a new system, but it's made by the same German company that designed the old one, even though there are American-made products which government investigators say are safer and cheaper than the Hoffman.*

Rich Potter can't understand how the Army can still use the old simulators to train soldiers.

Army officials, who declined repeated requests for on-camera interviews, say soldiers have to use the Hoffmans because replacements aren't ready and they're still safer than live ammunition.

Part One: Simulators Come Under Fire