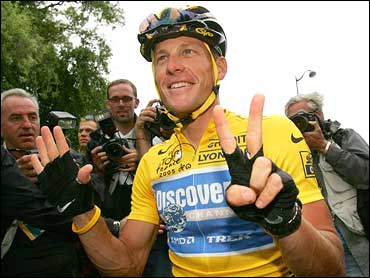 Lance Armstrong closed out his amazing career with a seventh consecutive Tour de France victory Sunday, and did it a little earlier than expected.

Because of wet conditions, race organizers stopped the clock as Armstrong and the main pack entered Paris. Although riders were still racing, with eight laps of the Champs-Elysees to complete, organizers said that Armstrong had officially won.

The stage started as it has done for the past six years, with Armstrong celebrating and wearing the race leader's yellow jersey.

One hand on his handlebars, the other holding a flute of champagne, Armstrong toasted his teammates as he pedaled into Paris to collect his crown. He held up seven fingers, one for each win, and a piece of paper with the number 7 on it.

Armstrong's new record of seven wins confirmed him as one of the greatest cyclists ever, and capped a career where he came back from cancer to dominate cycling's most prestigious and taxing race.

But Armstrong's last ride as a professional, the closing 89.8-mile 21st stage into Paris from Corbeil-Essonnes south of the capital, was not without incident.

Three of his teammates slipped and crashed on the rain-slicked pavement coming around a bend just before they crossed the River Seine. Armstrong, right behind them, braked and skidded into the fallen riders.

Armstrong used his right foot to steady himself, and was able to stay on the bike.

His teammates, wearing special shirts with a band of yellow on right shoulder, recovered and led him up the Champs-Elysees at the front of the pack.

Organizers then announced that they had stopped the clock because of the slippery conditions with more than 10 miles to go.

In retiring, the 33-year-old will manage a rare feat in sports--going out on the top of his game. Armstrong has said that his decision was final and that he was walking away with "absolutely no regrets."

His departure begins a new era for the 102-year-old Tour, with no clear successor. Armstrong's riding and his inspiring defeat of cancer attracted new fans, especially in the United States, to the race.

Millions turned out each year, cheering, picnicking and sipping wine by the side of the road, to watch him flash past in the race leader's yellow jersey, the famed "maillot jaune."

Cancer survivors, autograph hunters and enamored admirers pushed, shove, and yelled "Lance! Lance!" outside his bus in the mornings for a smile, a signature, or a word from the champion.

He had bodyguards to keep the crowds at bay, ruffling feathers of cycling purists who sniffed at his "American" ways.

Whatever emotions Armstrong felt were kept well in check, apart from what appeared to be a swipe at those who for so long accused him of doping, CBS News Correspondent Allen Pizzey reports.

"I'm sorry for you. I'm sorry you don't believe in miracles," Armstrong said.

Some spectators did shout obscenities or "doper!" To some, his comeback from cancer and his uphill bursts of speed that left rivals gasping in the Alps and Pyrenees were too good to be true.

Armstrong insisted that he simply trained, worked and prepared harder than anyone. He was drug-tested hundreds of times, in and out of competition, but never found to have committed any infractions.

Each rider burns off an average of 124,000 calories over the three weeks of the Tour. The sheer physical toll is perhaps why Armstrong has finally won over some of those French fans who for years saw him as more machine than human, Pizzey reports.

On Monday, Armstrong is taking his family on vacation in the south of France, the rest of his life ahead of him. Gaunt and tanned after three brutal weeks on French roads, Armstrong said he would go to the beach, drink wine, eat and "not worry about a thing."

At this Tour, he hammered his rivals from the first day in the opening time trial. He built on his lead in the first day in the Alps and comfortably controlled the race from that point — silencing doubters who questioned whether he still had the will and the legs to win.

Armstrong said that while he is retiring from cycling, he would keep fit and perhaps take part in mountain bike or cyclo-cross races from time to time.

Armstrong said he was retiring with "no regrets." Winning the Tour has brought him huge fame and fortune. "There's no reason to continue. I don't need more," he said.

"My time is up, I don't crave attention."