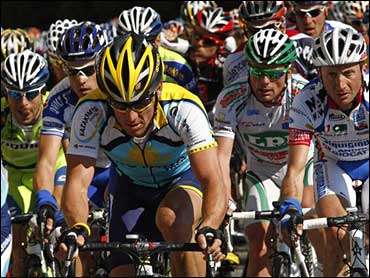 Lance Armstrong fractured his collarbone Monday in a crash during the Vuelta of Castilla and Leon race, disrupting the seven-time Tour de France champion's comeback.

Armstrong said he would fly to the United States and meet with medical experts to decide whether he needs surgery, leaving in question his participation in the Tour de France in July.

Armstrong was knocked off his bike during a pileup in the first stage of the race and was taken to a hospital by ambulance. The American, who crashed about 20 kilometers (12.5 miles) from the stage's finish, was grimacing and trying to hold his right arm as he entered the ambulance.

"The collarbone is broken and I have a little bit of road-rash abrasions," Armstrong said as he left Valladolid University Hospital. "I've never had this happen before, it's pretty painful. I feel really miserable."

Astana team leader Johan Bruyneel said on his Twitter feed that there were no complications in the break, and suggested that Armstrong could be back riding soon.

Armstrong is scheduled to compete in the Giro d'Italia from May 9-May 30. He is also preparing for the Tour de France from July 4-26.

"Toward the end of the race people started getting excited, a bit of wind, some hills and everybody wanting to be at the front," Armstrong said. "A couple of guys crashed in front of me, I crossed my wheel, then I hit them and over the top."

Armstrong eventually walked to the ambulance and climbed into the back.

The 37-year-old Armstrong is making a comeback to cycling and is riding with the Astana team as he prepares for another possible shot at a Tour de France title. He had not raced in Spain for five years.

After a three-year retirement, Armstrong started his comeback at the Tour Down Under in Australia in January, where he finished 29th overall, 49 seconds behind winner Allan Davis of Australia. He then finished seventh in the Tour of California in February.

"Now is not the time to ask (about a return to racing)," Armstrong said. "I need to relax for a couple of days, fix the problem and then make plans."

The mainly flat first stage of the Castilla and Leon covered 109 miles from Paredes de Nava to Baltanas. It was won by Joaquin Sobrino Martinez of Burgos Monumental in 4 hours, 31 minutes, 53 seconds after a sprint finish. He was followed by David Vitoria of Rock Racing and Jose Joaquin Rojas of Caisse d'Epargne.