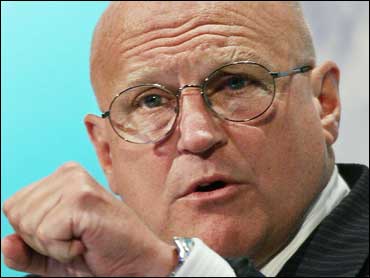 In an exclusive interview with CBS News national security correspondent David Martin, Richard Armitage, once the No. 2 diplomat at the State Department, couldn't be any blunter.

When asked if he feels he owes the Wilsons an apology, he says, "I think I've just done it."

In July 2003, Armitage told columnist Robert Novak that Ambassador Wilson's wife worked for the CIA, and Novak mentioned it in a column. It's a crime to knowingly reveal the identity of an undercover CIA officer. But Armitage didn't yet realize what he had done.

So, what exactly did he tell Novak?

"At the end of a wide-ranging interview he asked me, 'Why did the CIA send Ambassador (Wilson) to Africa?' I said I didn't know, but that she worked out at the agency," Armitage says.

Armitage says he told Novak because it was "just an offhand question." "I didn't put any big import on it and I just answered and it was the last question we had," he says.

"I had never seen a covered agent's name in any memo in, I think, 28 years of government," he says.

He adds that he thinks he referred to Wilson's wife as such, or possibly as "Mrs. Wilson." He never referred to her as Valerie Plame, he adds.

He says he was reading Novak's newspaper column again, on Oct. 1, 2003, and "he said he was told by a non-partisan gun slinger."

"I almost immediately called Secretary Powell and said, 'I'm sure that was me,'" Armitage says.

"I told them that I was the inadvertent leak," Armitage says. He didn't get a lawyer, however.

"First of all, I felt so terrible about what I'd done that I felt I deserved whatever was coming to me. And secondarily, I didn't need an attorney to tell me to tell the truth. I as already doing that," Armitage explains. "I was not intentionally outing anybody. As I say, I have tremendous respect for Ambassador. Wilson's African credentials. I didn't know anything about his wife and made an offhand comment. I didn't try to out anybody."

That was nearly three years ago, but the political firestorm over who leaked Valerie Plame's identity continued to burn as Special Counsel Patrick Fitzgerald began hauling White House officials and journalists before a grand jury.

Armitage says he didn't come forward because "the special counsel, once he was appointed, asked me not to discuss this and I honored his request."

"I thought every day about how I'd screwed up," he adds.

Armitage never did tell the president, but he's talking now because Fitzgerald told him he could.