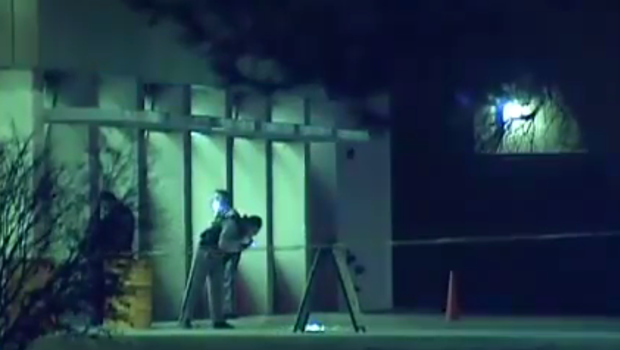 WICHITA, Kan. -- Wichita police say a black 17-year-old who was shot and wounded by a white police officer as he ran with a gun toward a high school gymnasium was a documented gang member who was registered as a student at the school.

At a news conference Saturday afternoon, interim police chief Nelson Mosley said a 20-year veteran of the police department fired several shots at the teen after the youth ignored repeated warnings to stop.

The incident happened after officers stopped a pickup truck as it was pulling into the parking lot of West High School around 6:30 p.m. Friday. Mosley said officers had been watching the truck after it left a Wichita home where police were told suspects in a double homicide earlier in the week might be located.

Four males were in the pickup truck when it was stopped in the parking lot, and one of them got out and started running, the chief said.

After being shot, the teen ran for about 100 yards before surrendering to police, Mosley said. The boy was treated at the scene before being taken to a local hospital in critical but stable condition.

The other three in the truck cooperated with police and were released after being questioned at city hall, he said. He said he didn't know why the teen ran, or whether he ever pointed the gun at police.

The shooting happened while a girls' basketball game between West and Northwest high schools was going on. There were 200 to 300 people in the school gym at the time, Mosley said.

The school went on lockdown for about 30 minutes before it was lifted, and a boys' game later that night went on as scheduled.

The police chief said the teen was hit once in the side-back area and once in the hand, with the bullet also hitting the gun.

Police released several pictures of the scene, including a blurry image taken from a police officer's body camera showing the teen running with what appears to be a gun. Police also provided a photo of the weapon.

Investigators determined none of the four in the pickup truck were involved in the double homicide, which happened on Tuesday in Wichita and was believed to be gang-related.

The officer who fired the shots is on administrative leave under department policy, Mosley said.

He said the case will be presented to the Sedgwick County district attorney's office for possible charges of possession of a handgun by a juvenile and possession of a firearm on school grounds.