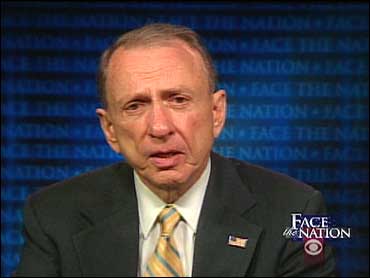 Specter, who switched parties to become a Democrat a year ago, was speaking to the Allegheny County Democratic Committee in Pittsburgh when he said this: "I thank the Allegheny Republican committee for endorsing me for the Democratic nomination."

Ten minutes later he again erroneously referred to the committee as a Republican group, stating it is a "great pleasure to be endorsed by Allegheny County Republicans, and together we'll win for victory."

Sestak has been hammering away at Specter in part by suggesting he is a political opportunist who does not truly believe in Democratic principles; he has been running an ad in which Specter is shown with President George W. Bush and Sarah Palin and is seen saying his "change in party will allow me to be reelected."

Specter's gaffe last night only plays into that characterization of Specter as something significantly less than a true Democrat. The audio of his remarks to the Allegheny County Democratic Committee was reportedly leaked by a website linked to Sestak called "The Real Arlen Specter."

A Quinnipiac poll released today shows Specter and Sestak essentially tied, a surprising situation in light of Specter's 21 point lead just more than a month ago.

According to Politico, Specter shrugged off his mistake last night, saying, "it's not unusual for anybody to misspeak from time to time" and telling reporters, "I'm not a television commentator. I'm not as smooth as you guys."

Watch CBS News Videos Online
But with the primary less than a week away, the five-term senator might want to take the gaffe seriously: As KYW-TV's Chris May suggested on "Washington Unplugged" today, Sestak's success is tied in large part to his ability to turn the race into a referendum on the incumbent. (Watch at left.)


"This is a man who has been a Republican for 45 years, switched to the Democratic Party in the wake of Barack Obama's election," he said. "At the time it seemed like a pretty pragmatic move. But he's having to appeal to a whole new base of voters."

Specter also was not helped by President Obama's Supreme Court nomination of Elena Kagan, who he opposed when she was nominated to be solicitor general last year, when Specter was still a Republican. He has since suggested he will support Kagan in a move critics have cast as emblematic of his lack of core principles. (Specter says the two jobs are "distinctly different position[s].")

Specter is running an ad featuring the president praising him, and national Democrats, who seem to see Specter as the better general election candidate, are reportedly "pouring cash" into the market to help fund the spot. But Mr. Obama now looks unlikely to campaign for the senator before Tuesday's primary, and last night's gaffe could provide even more momentum to the surging Sestak.

"The career politicians are the ones who got us into this," Sestak told the Washington Post. "They can't be the ones to get us out of it. The deal with Arlen Specter was the opposite of how we seized the White House. We won that by audacity, not political calculus."