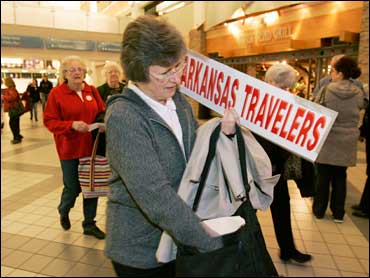 It's presidential campaign season and the Arkansas Travelers hit the road again to tell American voters outside the state the Clinton story.

This time, they are talking up Hillary Clinton, the front-runner among Democrats in the 2008 presidential race, not her husband and former President Bill Clinton.

Longtime friends of the Clintons, the Arkansas Travelers helped introduce their relatively unknown governor in 1992 to the country and toured the nation again on his behalf when he won re-election to the White House in 1996.

The group makes its first trip for Hillary Clinton on Wednesday, heading to Iowa to tell voters there she is more than the formal political figure they see on television and read about in the news.

"We'd like for them to get to know her as a person," said Little Rock consultant Sheila Bronfman, who organized the original Travelers. "She's real loving. She's a great mother. She's a great friend, and she has a fabulous sense of humor."

Bronfman has been friends with the Clintons for 30 years, as have many in the group. She said she wants voters in the Iowa caucus, an early indicator of how the presidential nomination will go, to know that Hillary Clinton is genuinely committed to public service and helping others.

"Our message basically is the Hillary we know, and talking about her time here in Arkansas and what she did with education for the state, with Children's Hospital, working for Arkansas Advocates for Children," Bronfman said. "She's been involved in these issues all along."

Travelers membership reached more than 435 during the Bill Clinton campaigns, with groups of varying numbers traveling when they could. They volunteer their time and pay for lodging, hotels and travel fare.

Wednesday, 34 of the 200 who have signed up this year are going on the Iowa trip. They will rent vans once they reach Iowa and will visit town squares, coffee shops, and senior citizen centers across southern Iowa. They will appear with the candidate at a campaign event in Ames and will attend an Ottumwa high school football game before returning home Sunday.

The rule is one suitcase and bring food "if you plan on eating right," Bronfman said. "We work in the rain and we don't sleep very much. We have a little whistle that the leaders use. We try to make it fun."

Public relations businessman Craig Douglass of Little Rock is new to the group but not to the Clintons. He said he wants to tell the story of Hillary Clinton's work with him and others on the Arkansas Children's Hospital Board and on state issues when she was first lady of Arkansas.

He remembers her working 18-20 hours at a time for the Children's Miracle Network annual telethon to raise money for the hospital.

"You see that dedication in someone when they are doing something outside the political arena when the only payoff is the satisfaction that you're helping real families with real problems," Douglass said.

State Rep. Gregg Reep of Warren is a veteran of the '92 and '96 Arkansas Travelers' trips and returns again for his friend. He said he packs as many clothes as he can stick in a bag and doesn't do a lot of preparation on his pitch because he can easily speak about "the real person" he's known since the early 1980s,

"What we'll just simply be doing is just testifying to what we know, how hard she works, that she's compassionate," Reep said.

Bronfman said voters can expect to see the Arkansas Travelers in New Hampshire and the group also may go to South Carolina, Nevada and back again to Iowa.