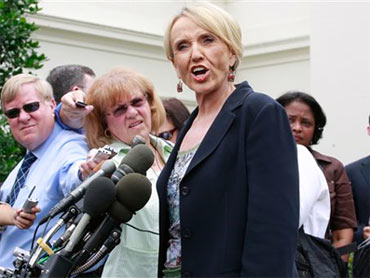 Lawyers for both officials say the lawsuit by Washington-based researcher Roberto Frisancho should be thrown out because his claim is based on his speculation that, as a U.S.-born Hispanic, he will be asked for immigration papers as a result of the law.

The law requires police, while enforcing other laws, to question a person's immigration status if officers have a reasonable suspicion that the person is in the country illegally.

Brewer and Goddard's lawyers say the lawsuit doesn't take into account that the Legislature amended the law to strengthen restrictions against using race as the basis for questioning by police.

Frisancho couldn't be reached for comment late Friday afternoon because he doesn't have a listed phone number.

In all, five legal challenges have been filed to the law since Brewer approved it in April. She was sued in four of the five cases and was required to file a response to two of the lawsuits on Friday. Brewer's response to one of the lawsuits wasn't publicly released late Friday afternoon.

"The law is clearly unconstitutional, but the overriding factor is that it does nothing about border violence and making neighborhoods safer," said Democratic state Rep. Ben Miranda, an opponent of the law and attorney who's representing a Latino clergy group seeking to overturn the law.

The law, which takes effect July 29, also makes it a state crime for legal immigrants to not carry their immigration documents and bans day laborers and people who seek their services from blocking traffic on streets.

The challenges generally allege that the law is unconstitutional, will lead to racial profiling and argue that it's the federal government's responsibility to regulate immigration.

Brewer's staff has said the law is constitutional, prohibits racial profiling and is a response to the federal government's failure to confront immigration woes.

More than a month ago, U.S. Attorney General Eric Holder said the federal government also may challenge the law.