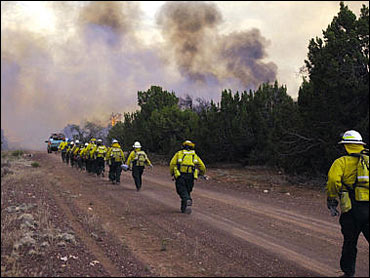 Firefighters moved bulldozers north of Mount Lemmon on Monday to try to stop a raging wildfire that destroyed more than 250 homes in a vacation community.

The blaze has charred more than 19,500 acres of pine forest on the mountain just north of Tucson and was only 15 percent contained, firefighters' spokesman Gerry Engel said.

Crews planned to use the bulldozers to fight the blaze's northward spread by digging a firebreak connecting roads, natural features and an area that already was burned over last year.

Officials said they appeared to have saved a University of Arizona observatory on top of Mount Lemmon.

They were still protecting what remained of Summerhaven, a mountaintop community where the fire roared through on Thursday, destroying more than 250 of its 700 or so homes. But they shifted some crews out of Summerhaven on Monday to intensify their efforts to keep the blaze from spreading.

"I think everything that hasn't burned is still at risk," said Jeff Whitney, deputy commander of the team fighting the fire.

Federal Emergency Management Agency teams in Summerhaven were expected to begin assessing the damage later in the week, a Forest Service spokesman said.

"The thing that hurts the worst is the loss of the forest," said Patty Kirchner, who didn't know what had happened to her family's cabin on Mount Lemmon. "Structures can be rebuilt, but the forest takes so long."

The cause of the fire had not been determined. Investigators expect to survey the fire's point of origin Tuesday.

The flames were fueled by pine trees ravaged by years of drought and a beetle infestation. The flames soon spread across the top of 9,157-foot Mount Lemmon and headed down the north slope.

The fire's spread prompted officials to evacuate a YMCA camp, where 250 children had been scheduled to arrive beginning Sunday. The Triangle Y Ranch Camp, about three miles from the fire as of late Sunday, was in no imminent danger and is among the structures the firebreak was intended to protect.

Firefighters said lighter vegetation at lower elevations eventually will help them get a handle on the blaze, but it could take a few weeks to contain it entirely.

Elsewhere Monday, about 300 firefighters attacked a blaze in northern New Mexico's Jemez Mountains, which are dotted with communities and laced with hiking and biking trails. The 300-acre fire was not yet threatening any homes or other structures in the area 60 miles north of Albuquerque, officials said.

"We're trying to get a handle on this fire and keep it small at this point," said Charlie Jankiewicz, a fire information officer with the Santa Fe National Forest.

Firefighters battled another fire that burned about 255 acres of private ranch land near Fort Union National Monument, said John Harrison, a spokesman for the state Forestry Division. He said the fire, which was sparked by lightning, was 10 percent contained late Monday

Firefighters also were battling a number of lightning-sparked fires in the Gila National Forest.

In Alaska, a 36,500-acre fire southeast of Fairbanks continued burning south Monday toward cabins on the lower Goodpaster River. About 120 firefighters were trying to stop the blaze, which was sparked by lightning June 14.

In a remote area northwest of Fairbanks, another fire grew to 30,000 acres Monday, but it was being monitored, not fought.