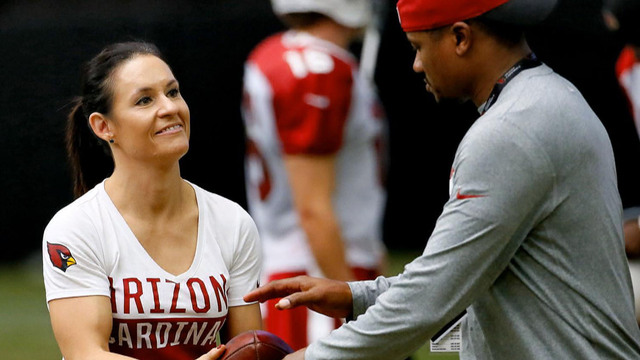 When the Arizona Cardinals take on the Denver Broncos Thursday night in their final pre-season game, they'll wrap up a historic summer for the NFL, reports CBS News correspondent Ben Tracy.

Jen Welter is helping coach the linebackers for the Arizona Cardinals and although it's just a temporary intern position, it does make her the first female coach in the history of the league.

"Nobody was outwardly bad, but it probably took them a little bit to say 'Let's see if she knows what she's doing and then when they figured that out, they would open up a little bit more," Welter said.

The 37-year-old joined the team in July and quickly bonded with the players. They call Welter "Dr. J" because she has a Ph.D. in psychology.

Even still, many wondered whether or not these NFL players would listen to a woman.

"They listen; they want to get better. They're competitors. They want to win," she said. "It's not about whether it's coming from a male or a female, it's like 'Do you have something that can help me and if you do, I'm going to listen and be receptive.'"

She even wrote personal notes to all the linebackers before the first game.

"It's something I would have wanted as a player and it honestly didn't occur to me that it was something they never had," Welter said.

She wrote one of those letters to cardinal linebacker Kevin Minter.

"She asks me about what you do outside of football, you know, she wants to get to know you," she said. "When you get a coach that does that, that's so involved, you know, with the player, whatnot, try to really trying to figure 'em out it's a breath of fresh air."

Welter may know how to connect with players because she was one. She played pro football for 14 years and, as a running back on the formerly all-male Texas Revolution, she took some serious hits. Now she's broken the coaching barrier in the NFL.

"I am OK actually being known as a woman who has ability. I don't want to discount the fact that I am a woman because it has opened so many doors for women and opportunities, so I embrace that," she said.

Her hiring came at a good time for the NFL, which has struggled with a so-called "women problem" after what some say was the lax punishment of Ray Rice for domestic abuse.

The league got a PR boost by hiring its first female referee earlier this year, but Cardinals coach Bruce Arians denies he's throwing a Hail Mary for the NFL.

"The NFL didn't have anything to do with it. It was just she and I," he said.

He hired her for her skills.

"I was very impressed with her resume and then when I met her, her enthusiasm and her passion for the game," Arians said.

Welter was hired for the pre-season and the team doesn't have a full-time spot for her, but she's been on the job long enough to become a role model.

She said it means the world to her that others are inspired by what she does.

"For little girls to see what I did and know that they can truly do anything, what's better in this life than that? I mean that to me is the greatest gift I could give them," she said.