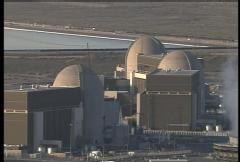 WINTERSBURG, Ariz. - A contractor working at an Arizona nuclear power plant was taken into custody and had his vehicle searched by a bomb squad after saying he may have a bomb in his vehicle.

Sgt. Jesse Spurgin of the Maricopa County Sheriff's Office says the man apparently made the comment "kind of in jest" during a routine vehicle inspection at about 12:45 a.m. Friday at the Palo Verde Nuclear Generating Station.

Spurgin says officials took the comment seriously as a precaution. He says a bomb squad scoured the vehicle and found no explosives.

The man's name hasn't been released. Authorities say he could be charged with a felony.

The nuclear plant is in Wintersburg, about 50 miles west of downtown Phoenix.

According to the The Arizona Republic, the Palo Verde Nuclear Generating Station is planning for a worst-case scenario at the plant's three reactors. Nuclear power plants across the nation have exhaustive emergency precautions in case power goes out. They're designed to shut down if an earthquake or other disaster strikes.
View CBS News In
CBS News App Open
Chrome Safari Continue