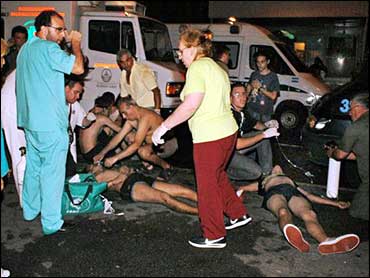 Emergency exits at a nightclub packed with teenagers were padlocked or wired shut when a flare ignited the foam ceiling, sparking a blaze that killed 175 people and injured more than 700 in one of Argentina's worst disasters, survivors and officials said Friday.

Some 4,000 fans at a Thursday night concert by the band Los Callejeros fought to reach the exits as burning debris fell on them. But they found at least four escape routes locked in an apparent effort to prevent people from entering the club without paying, Buenos Aires Mayor Anibal Ibarra said.

"Had they been open, we surely would have avoided a lot of deaths," Ibarra said, calling the locked doors at the Republica de la Cromagnon disco an "irresponsible act." The club's name means Cromagnon Republic.

Police want to question the club's owner, who vanished during the inferno. The concert crowd was nearly three times the venue's capacity of 1,500 people, Argentine media reported.

Investigators believe the fire was caused by a flare lit during the concert by a fan. People attending rock concerts in Argentina frequently set off flares and fireworks, and survivors said band members appealed to fans at one point during the show to refrain from lighting fireworks.

At least 714 people were injured, officials said. At least 102 were in critical condition, said Julio Salinas, an official with the Buenos Aires emergency services department.

The fire tore through the concert hall in the working-class neighborhood of Once, filling the club with thick, black smoke.

"Someone from the crowd tossed a flare and there were immediately flames," said 22-year-old Fabian Zamudeo. "Parts of the roof started falling down in flames and people started running, knocking over the speakers and light stands. People were choking on smoke and I tried to push as many people out as I could."

Witnesses described chaotic scenes of people rushing for the doors, their vision blurred by thick smoke that blocked out emergency lighting.

A 22-year-old who gave his name only as Andres said surging crowds pushed their way toward the club's six exits but found some of them would not open.

"Once the fire erupted, everyone ran for the doors, but there was only one very narrow one open at the exit closest to us. Another wider door next to it was locked," he said.

Other witnesses told of people struggling to force open doors.

Shirtless people spilled out of the building, carrying sooty victims on their shoulders and in teams. They laid people on the street and fanned them with shirts in an effort to revive them.

Many of the victims died from smoke inhalation, officials said.

"It seems they were condemned to a terrible trap," Interior Minister Anibal Fernandez said.

Streets outside the downtown nightclub were lined with stray pairs of tennis shoes and strewn with blackened clothes.

Hospital officials said many victims were in their teens or 20s, and rescuers said they also recovered the bodies of about a dozen young children inside the club.

Hundreds of tearful parents and relatives crowded outside hospitals and the morgue, seeking news about loved ones.

"Where is my son? I've been looking for hours and I can't find him!" an unidentified woman sobbed on television, describing him so rescue workers would recognize him.

The fire recalled a blaze that swept a Paraguayan supermarket in August, killing 434 people in an Asuncion suburb. Authorities later said the doors were ordered shut by the store's owner to prevent looting, trapping people inside.

In a 2003 nightclub fire in West Warwick, R.I., that killed 100 people, authorities said sparks from a band's pyrotechnic display ignited highly flammable foam used in the club as soundproofing.