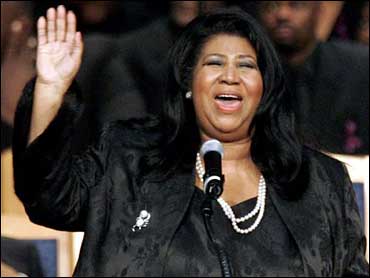 The NFL offended the Queen of Soul, but now all is forgiven. Aretha Franklin, who will perform the national anthem at Sunday's Super Bowl here in her hometown, initially felt Detroit's rich musical legacy was being snubbed when the Rolling Stones were chosen as halftime performers.

"I didn't think there was enough (Detroit representation) by any means. And it was my feeling: `How dare you come to Detroit, a city of legends — musical legends plural — and not ask one or two of them to participate,"' Franklin told The Associated Press on Tuesday.

"That's not the way it should be. Of course, they made that correction with no sweat."

Franklin wasn't the only displeased Detroiter. So the league belatedly announced that Motown legend Stevie Wonder would play before the game, and that Franklin would sing the anthem with New Orleans legends Aaron Neville and Dr. John plus a 150-member choir.

Franklin, who does not travel by plane, said she has been approached by the NFL in the past to sing at the Super Bowl, but didn't want to drive to those arenas from her home in suburban Detroit.

Now that the big game is here, Franklin is excited to take part, calling it "an ultra-special honor."

NFL spokesman Brian McCarthy said that from the beginning, the league wanted to honor Detroit's musical legacy. He also pointed out that the pre-game and halftime shows both last 12 minutes.

McCarthy also said Tuesday that singer India.Arie has been added to the list of pre-game performers. She will join John Legend, Joss Stone and Wonder in performing Wonder's hits as well as other Motown classics. The Four Tops also will perform prior to kickoff, but they will not be carried live on the ABC broadcast.

"It was always our intention to celebrate the contributions of Motown at the Super Bowl," he said.