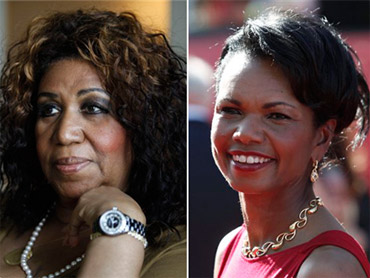 Condoleezza Rice is no stranger to the whims of royalty. So when the Queen of Soul herself, Aretha Franklin, decided the two should get together to play a song or two for charity, it was decreed.

The former U.S. secretary of state and Franklin take the stage Tuesday evening at Philadelphia's Mann Music Center in a rare duet for Rice, the classically trained pianist, and Franklin, the divalicious voice of a generation. Their aim is to raise money for urban children and awareness for music and the arts.

"It is a joint effort for the inner-city youth of Philadelphia and Detroit," Franklin told The Associated Press the night before their concert with the Philadelphia Orchestra. Their appearance will brim not only with Franklin's catalog of hits, but arias from the world of opera and classical music.

"We decided to give it a try," Franklin said. "So here we are, in the city of Brotherly - and Sisterly - Love."

Rice, better known as a diplomat and national security adviser, will accompany Franklin singing her hits "(You Make Me Feel Like) A Natural Woman" and "I Say a Little Prayer." Rice said she's been practicing furiously for her performance of Mozart's piano concerto in D Minor with the orchestra.

Franklin's repertoire will include songs from her new album "A Woman Falling Out of Love," to be released later this year.

Rice's given name is derived from the Italian opera stage instruction con dolcezza, meaning "with sweetness." Long a musician of note, she played from elementary school through college and beyond, in quartets and performing chamber music.

She has even played with cellist Yo-Yo Ma but "this will be the first time I've played with an orchestra since I was 18," she said.

When she learned that Rice played classical music, Franklin sent for one of her recordings "to hear what she sounded like."

Previously, she said, "All I had seen of Dr. Rice was in a political atmosphere. It just seemed foreign that she would be a classical pianist."

The two met at a White House function, Rice recalled. "We were just talking and chatting and she said 'You play, don't you?' And I said, 'Yes.' And she said we should do something together."

Rice told the AP their plan to play together was born of their mutual appreciation for music and determination to keep it near and accessible to children.

Franklin, relaxing in her hotel suite and holding a single long-stemmed peach-hued rose, deplored school budget cuts of music and arts programs as "a travesty" that cannot be allowed.

Rice, in a separate interview, agreed.

"Nothing makes me more unhappy than when I hear people talk about music education in the schools as extracurricular," Rice said.

Both women lauded each other's talents, and abilities, but Rice made it clear she'll leave the singing to Franklin.

"You do not want to hear me sing!" Rice said. "I'm a good choir musician, but I think I will stick to playing the piano."