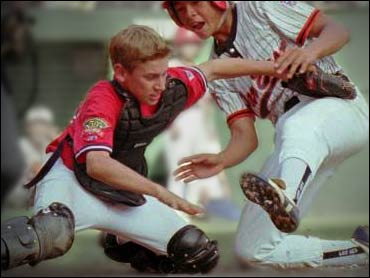 I'm not for going back to the bad old days of bullies running the playground, corporal punishment, or throwing a kid into a pool to see if he can swim. I don't think we need teachers and coaches who spend their days embarrassing and yelling at kids. But in our desire to be more humane towards children, I wonder if our politically correct urge to be sensitive has gone too far.

An elementary school in Santa Monica, California recently expressed a negative opinion of a game that it not only considered physically dangerous, but potentially harmful to a child's self-esteem. The name of the dangerous game is "tag."

The school newsletter contained the admonition that "The running part of this activity is healthy and encouraged; however, in this game, there is a 'victim' or 'it,' which creates a self-esteem issue."

When I was a kid, back before self-esteem issues were invented, I thought tag was fun whether I was "it" or being chased by "it." Obviously, just like any children's game, injuries can happen while playing tag. However, it seems more logical to make sure there is enough adult supervision so kids can play tag, rather than getting rid of it. Nobody wants kids to get hurt, but that doesn't mean they have to start playing things like "Velcro The Tail On The Donkey."

But the anti-tag faction seems more concerned about possible psychological damage than the physical risks. Among others, Dodge Ball and Red Rover have also come under fire in school districts across the country. These games supposedly "encourage aggression," and reward the strong, the swift, or the clever kid. These games have winners and losers, and sometimes a child is eliminated and has to sit out while those remaining play. Guess what? That's not the end of the world. So far, I've seen no statistics that prove conclusively that the major cause of depression is Duck, Duck, Goose.

Kids are tougher and more resilient than many adults think. Often, while the Little League mom or dad is still fretting about how upset little Johnny must be for striking out, Johnny has already moved on and is now roller-blading happily down the street.

How well are we preparing our kids for the future with this over-protective "everybody wins all the time" approach? If they don't learn to deal with disappointment, how will they handle it when things don't go exactly as they want them to? They're going to be thrown when they get a little older and realize there's no such game as, "Everybody Gets Into A Great College Without Even Trying." And later, they'll probably search in vain for the game "Everybody Automatically Gets A High Paying Job And A Life They Love."

Do we really want children to only play politically correct games? Will "You Don't Have To Find Me If You Don't Want To" be as much fun as "Hide and Seek?" Must our kids play "Visually Challenged Man's Bluff?" After kids get tired from playing "Cowboys and Native Americans" or "Capture the International Banner," will they come indoors and play card games like "Peace" and "Go Fish But Make Sure To Catch and Release?" Will "Simon Says" become "Simon Requests?" Does "Freeze Tag" really make the kid who's giggling too much to freeze feel bad? If you drop a "Hot Potato," are you going to spend decades on the couch lamenting how that event spoiled your life?

Here's my suggestion. The next time you're home with your little kid, touch him or her gently on the shoulder and say, "You're it!" Smile, and start to run away. Your kid will smile back and start chasing you. And don't worry about them enjoying themselves too much. Their fun will stop soon enough. They have to go back to that school playground tomorrow.