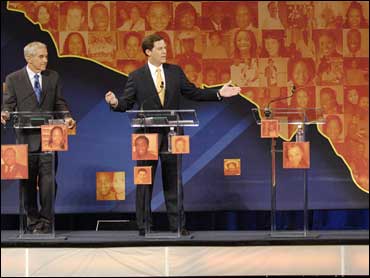 
The big story from last night's Republican presidential debate, which was held at Morgan State University in Baltimore and moderated by talk show host Tavis Smiley, wasn't what was said.

The four frontrunners for the Republican nomination -- Rudy Giuliani, John McCain, Mitt Romney and Fred Thompson -- all missed the debate, citing scheduling problems. As their lecterns stood empty, Smiley thanked the candidates who did show, characterizing them as "those in the Republican Party who do understand the importance of reaching out to people of color."

The debate came not long after Univision, a Spanish-language network, postponed its Republican forum because only McCain agreed to show up. The Democratic candidates, meanwhile, have already participated in both a Univision-sponsored debate and a forum focusing on African-American issues.

The leading Republicans' decision to skip the debate prompted former Republican congressman Jack Kemp to say to the Washington Post last week, "What are we going to do -- meet in a country club in the suburbs one day? If we're going to be competitive with people of color, we've got to ask them for their vote."

The outlook for Republicans who want their party to embrace black and Hispanic voters has not always been so bleak. At the beginning of his first term, President Bush surrounded himself with high-profile people of color, among them Colin Powell, Alberto Gonzales and Condoleezza Rice. He showcased his Spanish-speaking abilities -- which, though limited, signaled that he was reaching out to Hispanics, the fastest growing segment of the electorate -- as well as his faith, which gave him traction with religious African-Americans.

In the 2004 presidential election, Bush received 11 percent of the African-American vote, an increase of three percentage points 2000. He attracted more than 40 percent of the Hispanic vote, double what Bob Dole had received in 1996. Under the guidance of Karl Rove, Republicans hoped to leverage their gains with minority groups to help create a long-lasting political majority.

But Republicans' relationship with blacks and Hispanics took a sharp downturn after the 2004 election. The following year brought Hurricane Katrina and the government's poor response, which angered African-Americans and prompted hip-hop artist Kanye West to proclaim that the Republican president "doesn't care about black people." The war in Iraq, meanwhile, is even less popular in black communities than in the population as a whole.

And the rise of immigration as a major political issue has caused Republicans headaches. While the president has pushed a relatively moderate guest-worker program, many in his party have adopted nativist rhetoric that alienated Hispanic voters. (There is even a Republican presidential candidate, Tom Tancredo, whose entire campaign essentially rests on opposition to illegal and some forms of legal immigration.)

The upshot? Hispanic support for Republicans was just 30 percent in the 2006 midterm elections, and recent polls have it around 20 percent today. Many observers believe Republicans will be lucky to get more than 10 percent of the black vote in 2008.

Now leading Republican candidates are taking a hammering in the press for skipping forums with minority voters while still making time for groups like the National Rifle Association. In some sense, they are in a difficult position -- as CBS News senior political editor Vaughn Ververs points out, GOP candidates need to focus on winning early primary states, and there are more efficient ways to do that than by courting black voters who are unlikely to vote for them anyway. And if they show up to the Univision debate, they risk being forced into answers that could alienate those elements of the Republican base steadfastly opposed to immigration. (This cuts both ways: The leading Republican contenders also skipped a "values voters" debate earlier this month where hot-button issues like abortion were on the agenda.)

But the decision to skip the Univision and Morgan State debates, combined with the lingering legacy of Katrina and the still-raging immigration debate, creates a perception problem for Republicans that could be difficult to overcome.

"You know, you grow political parties by expanding your base, by reaching out to people and getting more people," said Sen. Sam Brownback, one of the candidates who did show up at the debate last night. "What they're doing is sending a message of narrowing the base."