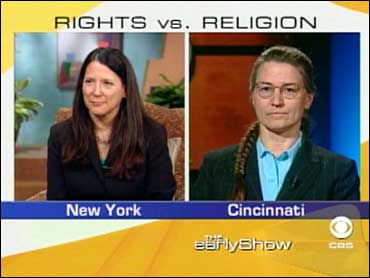 The battle over reproductive rights has spilled over into your local drugstore. Lawmakers in at least 26 states have introduced bills that would allow pharmacists to refuse to fill birth control prescriptions if it offends their religious or moral beliefs.

CBS News Correspondent Sharyn Alfonsi reports this is catching a lot of women by surprise.

No one knows how often pharmacists are refusing to fill prescriptions on these grounds, but it's already legal in a handful of states.

In addition, eight are considering similar "conscience clause" legislation that would protect pharmacists who refuse to fill prescriptions. What's more, legislators in South Dakota, Arkansas and Georgia hope to strengthen existing laws so pharmacists would be able to refuse to transfer or refer prescriptions for contraceptives to other pharmacies.

But four states are considering laws that would require pharmacists to do just the opposite -- put their personal views aside.

Steven H. Aden of the Christian Legal Society defends the right of pharmacists to refuse to fill prescriptions: "Usually if, for example, the Wal-Mart doesn't stock the morning after pill -- and Wal-Mart in fact does not, as a matter of its own business decision -- there's a K-Mart across the street or a CVS down the road. I don't think that in America, we have a situation where there are regions of the country where there's only one option and that option forecloses that choice to women."

But that's simply not the case for many women, who have to drive many miles to find a pharmacist to provide the drugs they need if their local pharmacist won't.

Karen Brauer, the president of Pharmacists for Life International, which supports pharmacists who refuse to fill prescriptions they believe are wrong, lost her job as a druggist several years ago for refusing to fill a prescription for a contraceptive.

She tells The Early Show co-anchor Hannah Storm pharmacist have "legal, ethical, clinical liability for their dispensing decisions. They share the liability with the doctor.

"It is very much wrong that women have been deprived of the information concerning the mechanisms of actions of these drugs. There are several, and one of them is to stop human life. …For the women to be deprived of this information is depriving them of the patient's right of informed consent to medical treatment."

But Planned Parenthood President Karen Pearl disputes that, telling Storm, "It's really a matter of whose conscience matters, and I would say the conscience of the women is the conscience that prevails.

"Ninety-five percent of American women use contraception at some point in their lives. This is a very, very common drug, and women use it to be responsible in planning their families. So when they go to their doctor and they get a prescription, they've already tacked about why they need this, and anybody who goes into a pharmacy in America expects to get their prescription filled, because already made their conscious decision."

What about a pharmacist simply referring a prescription he or she finds objectionable to a colleague or another drugstore?

"Physicians are not required to refer for abortion, nor should pharmacists be required to participate in this activity by giving a referral," Brauer responded. "A patient who's ambulatory can locate a willing provider of these services without the help of a pharmacist."

"That's simply not women's experiences in America," Pearl interrupted. "There are a lot of people who live in towns where there is not more than one pharmacy. They have to drive 30 miles…and, when they go and they want their prescription, to have that withheld by a pharmacist who refuses to even refer, really puts that woman at a terrible disadvantage. She feels humiliated. Many, many tell us they feel angry.

"This is a small group of extremists who really want to put their belief system, their ideology onto everybody else, and women in America simply won't stand for that."

"It's interesting," Brauer countered, "that the refusal to stop human life has become considered an extreme position. There is a human right, even recognized by the United States military, to refuse to stop human life purposely."

Where do we go from here, Storm wondered: "If we can refuse to fill prescriptions, say, for contraceptives, what about something else? Maybe drugs for AIDS patients. Maybe something like narcotics that can be potentially addictive. Are we opening a Pandora's box here?"

"Absolutely," says Pearl. "This is a very, very slippery slope. When pharmacists become an intermediary between the patient and the doctors to impose their ideology and their position on the relationship that the doctor and the patient have very, very carefully thought about -- where ask that stop?"

This time, Brauer spoke over Pearl, saying, "The pharmacist has always been an intermediary. That's the job of a pharmacist."