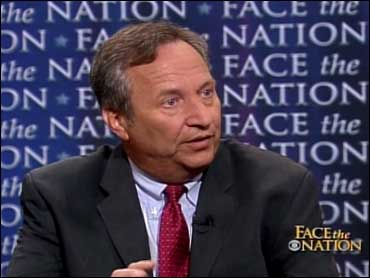 The departure of President Barack Obama's top economic adviser at the end of the year could provide the White House with an opportunity to revamp its economic team after the November elections, when voters are expected to take out their anxieties on Democrats.

The White House said Tuesday that Lawrence Summers, director of the National Economic Council, would leave at the end of the year to return to Harvard University. Though administration officials said Obama had known for some time that Summers would depart this year, news of his pending exit comes amid deep concern over the sluggish pace of the recovery, as well as criticism of the team that conceived the administration's economic policies.

Summers was the chief architect of many of those policies, playing a central role in the massive economic stimulus and the government bailout of the auto industry. He also was an advocate for the financial regulatory legislation Obama signed into law earlier this year.

But with those issues behind him and the end of his two-year leave from Harvard looming, a senior administration official said Summers felt it was the right time to go.

Summers, who served as treasury secretary during the Clinton administration, hadn't planned to return to government, the official said, but felt compelled to do so by the president and the economic conditions facing the country. He only wanted to stay for a year, but Obama asked him to stay through 2010 to oversee financial regulation and the implementation of the stimulus, said the official, who spoke on the condition of anonymity to discuss internal White House matters.

In a statement, the president said he was grateful for Summers' service during a time of "great peril for our country."

"While we have much work ahead to repair the damage done by the recession, we are on a better path thanks in no small measure to Larry's wise counsel," Obama said.

Obama has already lost two other high-level economic advisers: budget director Peter Orszag and the chief of the Council of Economic Advisers, Christina Romer, both of whom resigned this summer. Treasury Secretary Timothy Geithner would be the only one of Obama's top-tier economic advisers to remain with the administration should he stay through the end of the year.

There was speculation that Obama might turn to a corporate executive to replace Summers as a way to deflect criticism that his administration is antibusiness. Also, the White House is acutely aware that there are no women in top economic posts following Romer's departure; nor do the current advisers have significant private-sector experience.

Rep. John Boehner, a Republican from Ohio, the House minority leader, called on Obama last month to fire Summers, Geithner and other members of the economic team, saying, "Never before has the need for a fresh start in Washington been more pressing."

Though the White House dismissed Boehner's calls as politically motivated, Obama never ruled out changes in his advisory team. And with unemployment hovering near double digits and the public increasingly worried about the pace of the recovery, it's likely Obama would have had to make changes after the midterms had advisers like Summers and Romer not chosen to leave on their own.

Changes probably will extend beyond the economic team. Chief of staff Rahm Emanuel is considering leaving the White House to run for Chicago mayor, and officials have said other aides also could leave after the elections.

Summers has a reputation as a brilliant, if occasionally smug, economist. During the debate over overhauling the nation's financial regulations, liberals bristled at Summers' rejection of proposals to place limits on the size of banks. They held him partly responsible for the deregulation of banks that occurred in 1999 while he was treasury secretary.

When he returns to Harvard, he will be going back to his roots. At age 28 he became one of the youngest professors to receive tenure at Harvard. After leaving the Clinton Cabinet in 2001, he returned to Harvard as its new president, where he had a tense relationship with the university faculty. It erupted when he argued that gender differences explained why fewer women pursued math and science careers. He resigned in 2006.