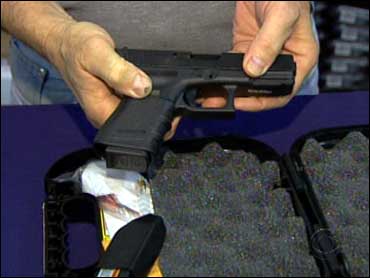 Last month, a government report revealed the U.S. military could not account for 190,000 -- or 30 percent -- of all weapons issued to Iraqi Security Forces between June 2004 and December 2005.

Thursday, Pentagon officials said $88 billion in spending in Iraq and Afghanistan is now under audit by the Department of Defense for fraud.

Now, in his exclusive report CBS News chief investigative correspondent Armen Keteyian has learned some of those missing weapons have ended up in the worst possible hands.

CBS News has learned that the CIA has photographic evidence that Austrian-made Glocks intended for Iraqi security forces and paid for by U.S. taxpayers are now in the hands of Iraqi insurgents -- in numbers that the intelligence community believes are in the thousands.

According to an intelligence source, the U.S. contractor in charge of the Glocks somehow lost track of an entire shipment. That mysterious disappeance is now part of a massive military bribery investigation centered around a contracting office run out of a small trailer at a military base in Kuwait. Eighteen federal investigators are digging into the actions of dozens of high-ranking U.S officers and military contractors.

Thursday, at a House Armed Services Committee hearing, lawmakers took aim at what the chairman called "a culture of corruption" surrounding billions in Iraq war contracts, but stopped short of publicly saying where some of the weapons wound up.

"The number of folks who have enormous responsibilty to this country are involved has, I think, made this a real tragedy for our country," says Duncan Hunter, the committee's ranking member.

After the hearing, Keteyian confronted Army Lt. General Ross Thompson, who admitted the Inspector General at the Defense of Department is looking at the CIA's evidence.

"We are going to report tonight that thousands of Glock pistols intended for Iraq security forces instead ended up in the hands of insurgents," says Keteyian. "What is your reaction to that?"

As Congress prepares to send another $2 billion to the Iraq security forces, Dept. of Defense officials testified they are working to find better ways to maintain appropriate accountability and control over military material.

It's small comfort to American soldiers in Iraq who may now be staring down the barrel of guns paid for by the U.S. government.