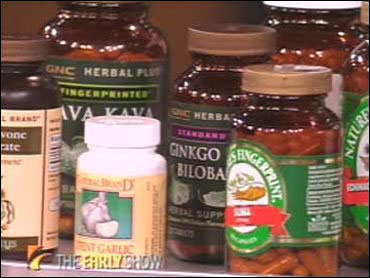 "This is actually a family recipe I ship all around the world," Hubbs-Kreft says.

Hubbs-Kreft is a certified herbalist who learned about "natural healing" from her grandmother.

"I believe fully in the healing properties of herbs," she says.

And hundreds of customers believe in her home-grown supplements.

"Business is very good for me. It makes me happy that people are willing to try a natural alternative," Hubbs-Keft adds.

This year, Americans will spend about $20 billion on supplements they believe will keep them healthy.

Hurley investigated the supplement industry for his book "Natural Causes." He examined hundreds of studies and found there is little proof that supplements work. Federal studies found no proof that St. John's Wort fights depression and no proof that echinacea fights the common cold.

And, Hurley cites other studies that suggest there is no proof that a healthy child or adult benefits from a vitamin or mineral supplement.

Nevertheless, some people swear by it, and say they take Vitamin C and don't get a cold. "I say, I can go all winter long and not get a cold and I don't take those things," Hurley counters.

"There are people that passionately believe in them. It's like a faith for them. I'm not here to challenge their faith. I'm a reporter. I looked at what evidence I could find," Hurley says.

And, Hurley says some of what he found was alarming.

"People have found prescription medications in these products. People have found pesticides," Hurley says. "The manufacturing process is not regulated. The safety and effectiveness has not been proved. It's a buyer's beware market."

Sue Gilliatt thought herbal remedies were safe. Then, her nose was burned off by one.

Gilliatt used an herbal paste called "bloodroot" to treat a pink area on her nose, which she thought might be cancer, until she could get to a doctor.

"After a few days the edges of the tissue started to lift off and I lost my entire nose cartilage. The nostrils were gone," Gilliatt says.

Her case is extreme, but Hurley says his analysis of data from the U.S. Poison Control Centers show a million and a half people have suffered adverse reactions to vitamins and herbal supplements since 1983.

Not everyone agrees. "These products are tested by their manufacturers, but there's a long history of not only safety of the products, but the fact that they do have proven benefits," says Steve Mister, who works for the supplement industry.

Mister says Hurley's book isn't credible because of its "lack of science, historical inaccuracies and emphasis on anecdotal evidence and opinion."

"I think it's premature for an author like Mr. Hurley to just dismiss an industry based on a few extreme examples," Mister adds.

Tuesday, CBS News will look at what the government has to say about supplements — about their safety and effectiveness — and why they still don't need FDA approval.