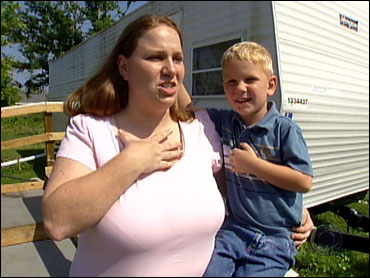 Today the government says 86,000 families are still living in those white FEMA travel trailers across the Gulf - more and more waking up with a host of health problems - tied, medical experts believe, to the place they still call home.

That trip has now lasted 21 months - something these trailers were never built for. Time has turned them into human Petri dishes - unregulated experiments on the health of thousands still stuck inside.

What were the symptoms?

"Pretty much just the constant coughing," Angela Orcutt told CBS News chief investigative correspondent Armen Keteyian. "He would just - you could hear it, just in his chest."

Dr. Scott Needle, a pediatrician in Bay St. Louis, was the first to notice Nicky was not alone. Dozens of his patients were suffering from the same symptoms that kept coming back: coughing, burning eyes, nose bleeds, sinus infections.

They had one curious connection.

"Every one of them said, you know, we are living in a FEMA trailer. And not only that, but, you know, little Johnny wasn't having these problems before we moved into that trailer," Needle said.

"It's the long-term carcinogen issue that really concerns me," Needle said.

Sloane says his crew worked at a breakneck pace for months, which, he says, forced the company to use cheaper wood products.

"Quality suffered dramatically because of the drive and pressure to put these trailers out," Sloan said.

Executives at Gulf Stream Coach declined an on-camera interview. Instead, the company issued this statement saying, in part, "For the FEMA trailers it used components and materials that met or exceeded industry standards."

But there are no federal standards for formaldehyde. The Environmental Protection Agency recommends a workplace exposure limit of .1 parts per million.

Last year the Sierra Club tested 31 travel trailers in Mississippi and found that virtually all - 94 percent - had levels of formaldehyde above that limit.

And CBS News has discovered an internal FEMA document that cites cancer as a potential job hazard for those just inspecting the trailers.

FEMA'S recommendation for fixing the problem? Open the windows and turn on the air conditioner.

David Paulison, FEMA's administrator, told Keteyian, "I don't know that the trailers are causing" any sickness.

As for Angela Orcutt, she's long suspected something in her home was making her son sick.

So we tested it, using the exact same meter used by FEMA.

Our result read .17. That's 70 percent higher than what the EPA standard is.