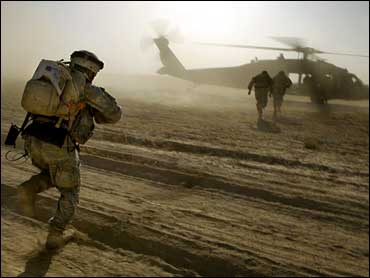 General George Casey told CBS News that coalition forces in Iraq will probably return home gradually in the months ahead, as long as the Iraqi government and security forces continue to progress.

The top American commander in Iraq would not say whether he will recommend a troop reduction plan during videoconference meetings with President Bush this week.

Mr. Bush has said he makes decisions about troop levels based on recommendations from commanders in Iraq, and Casey said on CBS' Face The Nation he is ready to give the president another update.

"I was waiting until we got a government seated before I gave the president another recommendation so we have some sense of what we've got," Casey told Bob Schieffer.

"I think as long as the Iraqi security forces continue to progress and as long as this national unity government continues to operate that way and move the country forward, I think we're going to be able to see continued gradual reductions of coalition forces over the coming months and into next year," Casey said on Face the Nation.

"There's been a great shift in what's being carried out by Americans over the last year," Casey said. "Today we have two Iraqi divisions, 15 Iraqi brigades and over 60 Iraqi battalions that are in the lead."

The Bush administration plans to re-evaluate its Iraq policy this week with members of the national security team, including Casey and other military commanders.

One of those Iraqi officials said on Sunday that the majority of coalition forces would leave before mid-2008 and that the number would drop below 100,000 by year's end.

"The more our Iraqi security forces, our police, our army, the more they grow in number, in training and are ready and able to perform and to protect our people, then the less we need of the multinational forces," Mouwafak al-Rubaie, Iraq's national security adviser, told CNN's "Late Edition."

"The overwhelming majority of the multinational forces will leave probably before ... the middle of 2008."

White House officials have played down expectations of troop cutback announcements coming from the upcoming discussions, scheduled for Monday and Tuesday at Camp David.

CBS News correspondent Joie Chen reports that the president is walking a fine line: He has to capitalize on the latest successes in Iraq but also has to persuade Americans that U.S. forces are still needed there.

"Many military personnel were saying the insurgency is Zarqawi, and, once we get him, we are going to have a much lower level of insurgency," Ken Katzman, an Iraq expert with the Congressional Research Service, tells Chen. "Now the burden of proof is to show that's true, and I think they will be disappointed that that is not true."

With reports swirling that there will be a build up of American forces in Baghdad in an effort to calm the violence in the capital city, Casey did, however, leave open the possibility that more American troops could be brought to Iraq.

"There has been a new dimension to the violence in Baghdad, and that has been kidnappings and murders we believe largely conducted by illegal armed groups," the general said on Face The Nation.

Casey said "it's not likely" that he would request extra troops during the discussions with the president.

"Right now we're not planning on it, but it's possible," Casey told "Fox News Sunday."

But, as Chen reports, some in Washington are saying that now is the time to stamp out the insurgency by flooding Iraq with more troops.

Paul Bremer, formerly the top American diplomat in Baghdad, said, the military should do whatever is necessary to get the job done soon.

"Whether that means more or fewer troops, or where we deploy the troops I don't know," he said, "But I do believe it's important that that be the outcome."