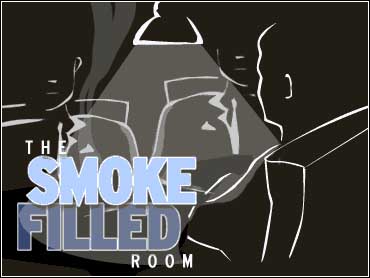 Bush Campaign Communications Director Karen Hughes has the answers to your questions. Part of George W. Bush's "Iron Triangle," Hughes is one of the Texas governor's most trusted advisers. Veteran CBS News White House Correspondent Bill Plante brings a top political expert into the Smoke-Filled Room each week to answer your questions.

Plante: Our first viewer Morris Roberts asks “How does a President Bush plan to deal with an overwhelmingly liberal-leaning media?”

Hughes: Governor Bush has always tried to treat the media that covers him with respect. Members of the media have a job to do, and while he won’t always like what they write or report, Gov. Bush recognizes the media is an important part of the process. He is accessible to reporters and spends time with them to help them better understand and report his positions.

Plante: ”What would Gov. Bush do to overhaul the IRS and to establish an equitable tax system?” questions Rocky Mountain Belle.

Hughes: Governor Bush has proposed a number of significant reforms to the tax system, including lowering rates for every taxpayer. He would abolish the death tax, which unfairly taxes people twice, and greatly reduce the marriage penalty. He would double the child tax credit from the current $500 to $1000. He would also lower tax rates for every taxpayer to make the system more fair, especially for those at the bottom end of the economic ladder. The current five-rate tax structure of 15, 28, 31, 36 and 39.6 percent would be replaced with four lower rates of 10, 15, 25 and 33 percent. Gov. Bush believes cutting taxes is important to keep the economy growing and to prevent Washington from spending all the surplus and thus fueling bigger government.

Plante: Kathy B. wants to know “Do you think Pat Buchanan will be the “spoiler” for Gov. Bush, like H. Ross Perot was for his father?”

Hughes: No, because I believe Gov. Bush has successfully united the Republican Party. Republicans, conservatives and independents know it is important to make their votes count this year to avoid another four years of Clinton-Gore.

Plante: Cindy notes “I’ve read where Gov. Bush has trouble using teleprompters, and that he won’t practice using them because he doesn’t want to sound too polished. Is this true? And if so, doesn’t he think a polished speaker like Ronald Reagan is better than someone who is not quite so glib?”

Hughes: The Governor does use teleprompters for some major speeches, and generally schedules a couple of practice sessions before he gives those speeches. Almost all of his speeches begin with a meeting with the governor and his writers and policy advisors, and he outlines for them the major points he wants to make. He sends a great deal of time developing and re-writing major speeches, and for a speech like the convention speech, he will certainly work on the speech extensively and practice until he is comfortable delivering it. President Reagan was an exceptionally talented and gifted communicator and Gov. Bush admires that ability.

Plante: What will Gov. Bush do to woo back voters who have defected to the Reform Party? Peg is curious.

Hughes: Governor Bush comes from outside Washington and has a record of reforming education, welfare, tort laws and the juvenile justice system in Texas. During his campaign for President, Gov. Bush has outlined an innovative and specific agenda for reforming public schools, saving and strengthening Social Security and Medicare, rebuilding the military and cutting taxes. His message is optimistic and inclusive, and he will work to change the tone of Washington to a more positive and constructive one. Many independent and reform-minded voters have told me they are impressed with the way Gov. Bush worked with Democrats for constructive reform in Texas, and he has pledged to do the same in Washington.

Plante: Tom C. writes “I believe that Gov. Bush said he wouldn’t make abortion a litmus test when picking Supreme Court Justices. Won’t this hurt him with strict conservative voters? And how will he reach out to them?”

Hughes: Gov. Bush has said he will appoint Supreme Court justices who will interpret the law and will not attempt to legislate from the bench. I believe that most conservatives and most Americans want Supreme Court judges who are people of character and integrity, and who are strict constructionists. Governor Bush is a conservative who has worked successfully to unite the Republican Party to support his candidacy.

Pante: ”If elected, how different will be Gov. Bush’s administration from his father’s?” asks Edie.

Hughes: Aha – trying to trick me! Gov. Bush loves his father and is not going to say anything to criticize or provoke comparisons. The challenges facing the next President will be very different than those faced by President Bush. Thanks to the success of the Reagan-Bush administrations, the Cold War is behind us and America faces new and different international and security challenges. One thing will be the same: Governor and Laura Bush will bring the same integrity and strong sense of values and family that President and Barbara Bush brought to the White House.

Plante: Ann wonders “What will Gov. Bush do about the growing problem of illegal immigration?”

Hughes: Governor Bush believes we must do a better job of enforcing our borders. As Governor of a border state, he has seen first-hand the problems of illegal immigration and he will increase manpower and resources to protect our borders. He proposes dividing the Immigration and Naturalization Service into two separate agencies; one focused on enforcing the border and reducing illegal immigration, the other focused on welcoming and assisting those who seek to immigrate to our country legally. Gov. Bush also knows that a major reason for illegal immigration is the strong motivation of mothers and fathers to come to this country to provide a better life for their families. That’s why he’s a strong supporter of free trade, to help Mexico improve its economy and build a middle class that offers hope for a better life for its citizens.

Plante: How is Gov. Bush handling the anti-death penalty protesters who are now following him? What are his concerns that DNA evidence will exonerate innocent prisoners now on death row? John F. wants to know.

Hughes: Gov. Bush believes if DNA evidence is available and relevant to a capital case, it should be examined, and that’s why he recently granted a 30-day delay of a scheduled execution to allow additional DNA testing. Gov. Bush understands that people have very strong feelings about the death penalty. He supports capital punishment because he believes a strong deterrent helps save lives. He also took an oath to enforce the laws of Texas, including the death penalty. These life and death decisions are the most difficult decisions a Governor makes. Governor Bush and lawyers in the governor’s office review each case thoroughly, and only allow executions to proceed if they believe the individual is guilty and has had full access to the courts.

Plante: ”Being Communications Director for the Bush campaign must be a very interesting and busy job. What is it like working for Gov. Bush?” Liz is curious.

Hughes: Interesting, challenging, always busy and a gret deal of fun. I joke that a big part of my job is running around after my boss and trying to keep up with him. He is very energetic, he asks great questions and he almost always thinks of something the rest of us don’t, so he keeps us on our toes. He is also very thoughtful. He has invited my family to many special occasions, and he once sent me home from a campaign trip so I could watch my son play in a Little League championship game. He has a great sense of humor and he likes to tease people, so working for him is a lot of fun. Of course, since he decided to run for President our life is really hectic and challenging. I would not work this hard and spend this much time away from my family if I did not truly believe he is the leader we need as our next President.