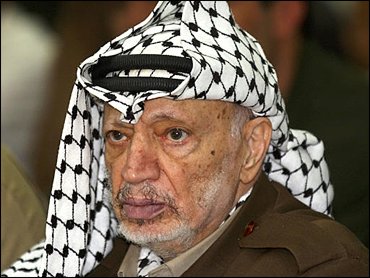 Yasser Arafat diverted nearly $1 billion in public funds to insure his political survival, but a lot more is unaccounted for.

Jim Prince and a team of American accountants - hired by Arafat's own finance ministry - are combing through Arafat's books. Given what they've already uncovered, Arafat may be rethinking the decision. Lesley Stahl reports.

"What is Mr. Arafat and the Palestinian Authority worth today?" asks accountant Jim Prince. "Who is controlling that money? Where is that money? How do we get it back?"

So far, Prince's team has determined that part of the Palestinian leader's wealth was in a secret portfolio worth close to $1 billion -- with investments in companies like a Coca-Cola bottling plant in Ramallah, a Tunisian cell phone company and venture capital funds in the U.S. and the Cayman Islands.

Although the money for the portfolio came from public funds like Palestinian taxes, virtually none of it was used for the Palestinian people; it was all controlled by Arafat. And, Prince says, none of these dealings were made public.

"Our whole point is to bring it out of control of any one person," Prince says.

That's what happened with the portfolio money, which is now under the control of Salam Fayyad, a former World Bank official who Arafat was forced to appoint finance minister last year after crowds began protesting his corrupt regime.

According to Fayyad, "There is corruption out there. There is abuse. There is impropriety, and that's what had to be fixed."

Statements like that have earned Fayyad, a bookish technocrat who spent 20 years in the U.S., a reputation for courage - which was enhanced when he immediately posted the details of Arafat's secret portfolio on the Internet.

Fayyad's investigators are treading softly, well aware that their probe may become too embarrassing for Arafat.

Has he tried to stop them? "We run into obstacles in a number of places, particularly among the old PLO types," Prince says, adding one might draw their own conclusions as to whether his statement includes Arafat himself.

Martin Indyk, a top adviser on the Middle East in the Clinton administration and now head of the Saban Center, a Washington think-tank, says Arafat was always traveling the world, looking for handouts. Money, he says, is "essential" to Arafat's survival.

The stockpile went well beyond the portfolio. Arafat accumulated another $1 billion with the help of -- of all people -- the Israelis. Under the Oslo Accords, it was agreed that Israel would collect sales taxes on goods purchased by Palestinians and transfer those funds to the Palestinian treasury. But instead, Indyk says, "that money is transferred to Yasser Arafat to, amongst other places, bank accounts which he maintains off-line in Israel."

Until three years ago, Israel put the tax revenues into Arafat's account at Bank Leumi in downtown Tel Aviv, no questions asked. But why?

According to Indyk, "The Israelis came to us and said, basically, 'Arafat's job is to clean up Gaza. It's going to be a difficult job. He needs walking-around money,' because the assumption was that he would use it to get control of all of these terrorists who'd been operating in these areas for decades."

Obviously, that hasn't happened. No one knows this better than Dennis Ross, who was Middle East negotiator for the first President Bush and President Clinton, and now heads the Washington Institute for Near East Policy. He says Arafat's "walking-around money" financed a vast patronage system.

"I used to see that people came in, you know, with their requests," Ross says. "'I need a phone. I need an operation. I need a job.' Arafat had money to dispense."

Like a Chicago ward boss, he still doles out oodles of money; Fayyad says he pays his security forces alone $20 million a month, all of it in cash.

Arafat may have $1 billion, but he sure isn't spending it to live well. He's holed up in his Ramallah compound, which the Israelis all but reduced to rubble a year-and-a-half ago. Arafat has always lived modestly, which you can't say about his wife, Suha. According to Israeli officials, she gets $100,000 a month from Arafat out of the Palestinian budget, and lives lavishly in Paris on this allowance.

He also uses the money to bolster his own standing. Both Israeli and U.S. sources say those recent outpourings of support at Arafat's compound were "rent-a-rallies," and that Arafat has spent millions to support terrorists and purchase weapons.

Did he steal from his own people?

Palestinians certainly paid dearly for something else Fayyad uncovered: a system of monopolies in commodities -- like flour and cement -- that Arafat handed out to his cronies, who then turned around and fleeced the public.

Fayyad says it could accurately be seen as gouging his own people. "And especially in Gaza which is poorer, which is something that is totally unacceptable and immoral, actually."

Of all the monopolies, none was as lucrative or as corrupt as the General Petroleum Corporation, the one for gasoline. The corporation took the fuel it purchased from an Israeli company and watered it down with kerosene, not only defrauding the Palestinian drivers, but wrecking their car engines.

When Fayyad dismantled the corporation, the man who had run it fled to California. Ever since, with the monopoly broken up, Palestinian drivers have paid 20 percent less for gas and 80 percent less for diesel fuel. Gas stations now advertise 100 percent pure products.

Fayyad became a hero, like the Robin Hood of the Palestinians. Millions of people were affected by this one move.

He says he was just doing his job. "A lot of this is about, you know, distinguishing between right and wrong. And that's a straightforward proposition."

Mohammed Rachid, Arafat's economic adviser who set up his tangled web of investments and monopolies, says he's cooperating with Fayyad's investigators. Rachid left the Palestinian territories about a year ago under a cloud. He asked CBS News not to reveal where we met him for his first television interview.

"I'm proud of what I did till now," Rachid says. "I think I showed a good performance."

He's referring to the investment portfolio he managed for Arafat. He also opened that account at the Leumi Bank in Tel Aviv. According to a recent report by the International Monetary Fund, that secret account was: "Under the control of President Arafat and his financial adviser Mohammed Rachid" -- and no one else.

"If we are having a secret account, we should have it in Israel? You think this is logical?" Rachid asks.

But that's what the Israelis, and the people working for Fayyad, say it was.

Rachid says that "transfers to Leumi Bank account never stayed. It was receiving the revenues and transferring the revenues to the Palestinian Authority's account in the Arab bank in Gaza."

He's saying the Leumi money was sent to the Palestinian Authority. But, in fact, much of it was sent to Switzerland, to the prestigious Lombard Odier Bank, for yet another secret investment account that held over $300 million. In a letter obtained by CBS News, Rachid tells the bank that the funds will come from Palestinian "taxes" and "customs revenues."

Actually, it was under a code name, "Ledbury" -- not the Palestinian Authority -- and Minister Fayyad says that this pot of money, too, was available only to Arafat. The Swiss account was closed out in 2001. No one really knows where that money is today.

Does Rachid think that it should have gone, in some way, back to help the Palestinian people?

There's yet another stash of money Arafat might be asked about: the funds he collected when he was chairman of the PLO in exile. The PLO's former treasurer told us he saw Saddam Hussein hand Arafat a $50 million check for supporting him during the first Gulf War. And there were other large gifts from the KGB and the Saudis.

Ross says, "Arafat used to say to me, 'Where's my money? You need to go to the Saudis and get my money.' It was never the Palestinians' money."

Fayyad is trying to make sure it's the people's money, but many say his one-man reform effort is having only limited success. Arafat recently sent armed men to prevent Fayyad from replacing the head of the civil service, who runs Arafat's patronage apparatus. That has lead some to think Fayyad himself could be in danger.

Other people who have dared to call for transparency of all these finances have been beaten up, shot, and silenced. Why is Fayyad surviving? Indyk says, "We should not take it for granted."

He has upset so many powerful people, and his offices have already been ransacked more than once. But Fayyad says he does not feel threatened.

"It's a dangerous neighborhood," he admits. "But you know this is about, you know, doing the right thing for the people."