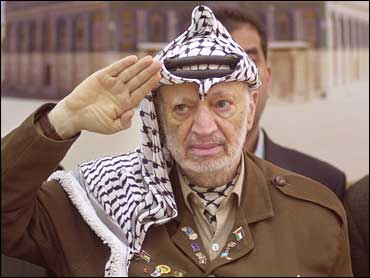 Yasser Arafat acknowledged Wednesday that the Palestinian Authority had made mistakes, but the rare admission appeared to be aimed more at deflecting criticism about his corrupt government than making real changes.

In a decade at the helm of the Palestinian Authority, Arafat has resisted attempts to get him to fight official corruption, reform the security services and relinquish some of his near-absolute powers. It was difficult to say how sincere he was in the vague comments in a televised speech to parliament.

"There were wrong practices in some institutions, and some misused their positions," he said. "There were not enough efforts to strengthen the rule of law, the independence of the judicial institutions ... But we have begun measures to solve this."

In the Gaza Strip, meanwhile, Israel set off a mysterious explosion in an olive grove near the house of a senior Hamas activist early Wednesday, killing five Palestinians — at least four of them militants — and wounding seven. The main target of the attack, Hamas activist Ahmed Jabari, escaped with light injuries.

Arafat's speech comes amid growing dissatisfaction in the West Bank and Gaza Strip with his rule. Last month, street protests erupted over some of his appointments, and Arafat's prime minister briefly threatened to resign.

Even his harshest critics have not demanded Arafat resign — he is still widely considered as a national symbol and a guarantor of unity — but he was clearly rattled by the complaints.

In response, Arafat promised sweeping government reform and has met with lawmakers who asked him to put his pledges in writing. However, legislators have come away disappointed, saying Arafat has largely been evasive.

In his speech to parliament, Arafat acknowledged there is some official corruption, said those engaged in wrongdoing should be prosecuted and reiterated that he would streamline the security forces. However, he gave no specifics.

One of his harshest critics, former Cabinet minister Abdel Jawad Saleh, shouted that Arafat himself was protecting the corrupt. Arafat got angry, responding with an indignant question: "I'm protecting them?"

Saleh complained after the speech that Arafat is "not serious" about reforms and warned that there could be a nonviolent "Palestinian uprising against this authority very soon."

Palestinian Prime Minister Ahmed Qureia, who briefly resigned last month in frustration over his lack of authority, sat next to Arafat during the speech. At one point, Arafat turned to Qureia, saying: "My brother, my historical comrade, you have all my support for the work of your government."

Israel said it was responsible for the blast, and that its air force was involved, but did not explain further. In the past four years of fighting, Israel has killed scores of Palestinian militants with missiles fired from helicopters.

However, Palestinians said that in Wednesday's incident, they only saw an Israeli drone, or unmanned aircraft, and that there were no helicopters or warplanes in the sky. Some said they believed the drone had set off a bomb by remote-control.

One witness, Moussa Bakroun, 44, said he was in his garden when he heard the blast. "We heard the sound of screaming from the Jabari olive grove across the street," he said. "We saw human body parts everywhere, and a hole in the ground."

Bakroun said he had heard a drone overhead for some time before the blast.

Palestinian security officials said they did not know what caused the blast.

Hamas said among the dead were three of its members, including Jabari's adult son, as well as a member of the Islamic Jihad group. The fifth man was not immediately identified. Seven people were wounded, two of them critically, hospital officials said. Jabari himself was lightly hurt.

Palestinian Cabinet minister Saeb Erekat said Israel was escalating the conflict, both by carrying out attacks such as Wednesday's and by expanding Jewish settlements. "Things may go from bad to worse," Erekat said.

The explosion came as Israeli Prime Minister Ariel Sharon prepared for a showdown with rebels in his Likud Party over bringing the dovish Labor Party into his government.

Many hardline Likud members, opposed to Sharon's plan to evacuate all 21 Jewish settlements in Gaza and four in the West Bank by late next year, are against letting Labor in, because it would cement a Cabinet majority in favor of the pullout.

Sharon lost his parliamentary majority over his "unilateral disengagement" plan because of objections from pro-settlement coalition partners. Also, Likud members voted against the plan by a wide margin in a nonbinding referendum, but Sharon chose to ignore it.

Analysts say if the convention later Wednesday votes against a coalition with Labor, Sharon might have to call early elections. However, the vote, like the referendum, would not be legally binding.

Labor backs Sharon's plan, although it also favors a wider pullback from the West Bank and direct talks with the Palestinians. Some Labor lawmakers have expressed concerns that Sharon, a longtime backer of Jewish settlements, does not intend to implement his plan.

On Tuesday, Sharon approved the construction of 1,000 new housing units in four large West Bank settlements — perhaps with an eye on the Likud convention.

State Department spokesman Adam Ereli said the Bush administration was "studying the details" of the planned construction to see if it met the commitments Israel made under the Road Map to freeze all settlement activity. Pressed by reporters, Ereli said he could not explain how 1,000 new buildings could not be a violation of that commitment, adding "not everything we say to the Israelis is on the record."