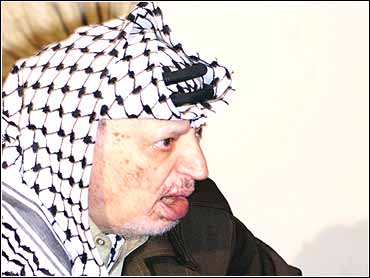 Palestinian President Yasser Arafat called for fresh U.S. action on the stalled peace process with Israel during a visit to the West Bank on Saturday.

Arafat flew by helicopter from Jordan to the West Bank city of Ramallah, where he will host U.S. Secretary of State Colin Powell on Sunday, a spokesman for the Palestinian leader said.

"We hope that the visit of Mr. Powell marks a beginning of American movement," Arafat told reporters in Ramallah.

The Bush administration has signaled however, that they will tone down the intensive U.S. role in Mideast peacemaking that was fostered so ardently under former President Bill Clinton.

Peace efforts largely collapsed in the wake of nearly five months of violence that has taken 407 lives; 335 Palestinians, 14 Israeli Arabs, 57 other Israelis and one German.

Both sides have set rigid conditions for where peace talks should resume.

The Palestinians say negotiations must resume at the point where they left off last month under the outgoing government of Prime Minister Ehud Barak, a demand Prime Minister-elect Ariel Sharon has rejected.

Sharon, in turn, has said he will not negotiate under fire. The Palestinians say Israel is the sole aggressor, and demand that Israel lift its blockade of the West Bank and Gaza Strip before talks resume.

Furious at the latest U.S. air attacks on Iraq, Palestinians took to the streets of several West Bank cities to burn U.S. flags and shouted slogans calling on Iraqi President Saddam Hussein to rain Scud missiles on Tel Aviv, as he did in the 1991 Gulf War.

It was Arafat's first visit to the West Bank since a Christmas trip to Bethlehem. Palestinian officials cited security reasons for their leader's absence from the West Bank, saying he was at risk of attack by Jewish settlers.

Israeli political commentators have speculated that Arafat stayed away because he had effectively lost field-level control of his Fatah faction, whose gunmen have been attacking soldiers and settlers in a nearly five-month-old uprising.

But on arrival in Ramallah, Arafat was publicly greeted and hugged by Marwan Barghouthi, a top Fatah official in the West Bank and a key activist in the uprising.