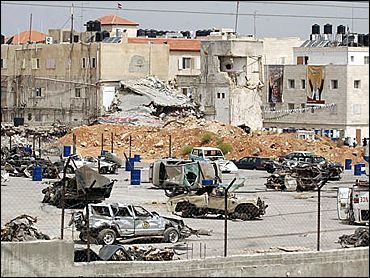 Also Thursday, Prime Minister Ariel Sharon's top deputy said the Israeli leader remains committed to carrying out a plan to withdraw from the Gaza Strip, despite rejection of the plan by the ruling Likud Party this week.

In the Gaza Strip, the Israeli army began construction of a fence meant to protect Jewish settlers following a deadly attack on an Israeli family this week. In the West Bank, a Palestinian man was killed in fresh violence.

Last month, reports CBS News Correspondent Robert Berger, Sharon said he is no longer bound by a promise to the U.S. not to harm Arafat. It's clear that Arafat is taking that threat seriously, whom Israel accuses of backing Palestinian militants.

Earlier this week, Israeli troops briefly surrounded Arafat's compound during an overnight raid. The army said Arafat was not the target of the raid, but Palestinian officials said the veteran leader fears for his life.

"We have a real concern that they may come here," said Palestinian Cabinet minister Saeb Erekat.

Dozens of old cars were scattered throughout the main courtyard outside Arafat's headquarters Wednesday. Hundreds of blue barrels filled with concrete were spread throughout the area, in a move to prevent tanks from moving in. Cement trucks were in the compound Thursday filling more barrels.

Palestinian officials said Arafat knows the measures can't stop Israeli bulldozers and tanks, but that he refuses to be taken alive.

"Arafat will resist any attempt to arrest or get into his office," Erekat said, adding that he fears "the end of the game" will be the killing of Arafat.

Israeli security officials, speaking on condition of anonymity, said there were no immediate plans to attack the Palestinian leader. But they said Israel has a standing plan on how to snatch Arafat from his headquarters and expel him.

Israel has confined Arafat to his Ramallah compound for more than two years. Last September, Israel's Cabinet decided Arafat should be "removed" after a pair of suicide bombings killed 15 Israelis. It has repeatedly threatened him since then, but never taken any action.

Israel's recent assassinations of two leaders of the militant group Hamas have added to Palestinian concerns about Arafat.

Sharon has been weighing his options since his Likud Party overwhelmingly rejected his proposal to pull out of the Gaza Strip and four West Bank settlements. Sharon had said the plan would boost Israel's security in the absence of a peace agreement with the Palestinians.

He is under pressure from hard-liners within the party who oppose such concessions, as well as moderates within his coalition who want him to continue the diplomatic efforts. Aides have said the prime minister is considering a scaled-down version of his "disengagement" plan that might be more acceptable to all sides.

Sharon thought his Likud party was more loyal to him than the traditional ideology of settling the Biblical Land of Israel, reports Berger. He was wrong.

Many of the settlers are Orthodox Jews, some immigrants from the United States, who believe the West Bank is the ancient countries of Judea and Samaria given to the Jewish people by God. They believe the Gaza Strip is also part of the Promised Land.

Political analyst Gil Hoffman says it was the result of over-confidence by Sharon and his aides.

"Sharon's spokesmen told me that the likelihood of the plan falling in the referendum was as likely as Osama bin Laden converting to Judaism," Hoffman said.

"We will implement the disengagement plan," Olmert told the Jerusalem Post. "The prime minister must now create a mechanism that will allow him to pass this resolution, and that he will do."

Opposition leader Shimon Peres, who met with Sharon earlier this week, told the Post that Sharon plans to seek Cabinet approval for the disengagement plan.

"He said he just needs a week or two to consult his ministers," Peres was quoted as saying.

Abdullah's visit to the White House makes up for a postponement two weeks ago by the king amid Arab anger over Mr. Bush's endorsement of Israel's retention of some Jewish population clusters on the West Bank as part of any settlement with the Palestinians.

Jordan, which lost the West Bank and east Jerusalem when it joined other Arab countries in war with Israel in 1967, has long given up any interest in getting the West Bank back from Israel.

Instead, Jordan wants all of the land turned over to the Palestinian Authority to be part of a Palestinian state with its capital in Jerusalem.

In the days leading up to Abdullah's visit, Jordanian and Bush administration officials discussed the king's request for a written statement that Palestinians who have lost homes and land would be compensated as part of an overall agreement with Israel.

Administration officials said Wednesday the idea remained under consideration. On Wednesday, Powell said without elaboration, "I think the king will be pleased."

In Gaza, Israel began construction of a fence along a four-mile stretch of road to protect Jewish settlements, military officials said. The move came after Palestinian gunmen ambushed a settler's car on Sunday, killing a pregnant woman and her four children, and follows the defeat of Sharon's initial plan to remove settlers from Gaza.