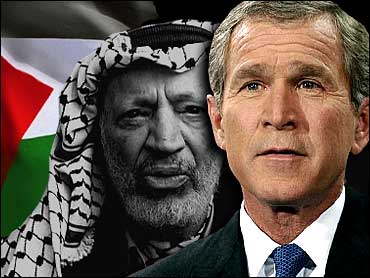 The violence came as Israeli and Palestinian leaders expressed widely divergent views on a Mideast policy speech delivered Monday by President Bush. He called for a new Palestinian leadership and an end to terrorism, holding out the prospect of a provisional Palestinian state. Mr. Bush did not mention Yasser Arafat by name but clearly was calling for his removal.

However, Arafat said Tuesday he did not believe Mr. Bush was referring to him.

"Definitely not," Arafat said, adding that he found praiseworthy elements in the speech.

``Peace requires a new and different Palestinian leadership, so that a Palestinian state can be born,'' Mr. Bush said.

The president's remarks were essentially shorthand for an end to Arafat's rule. But they suggested the irony of what could be in store when Palestinians go to the polls -- the re-election of the Palestinian leader Mr. Bush has effectively written off.

``I think Arafat's next step will be to call for elections. If Mr. Bush is asking for a change of leadership, then the way to do so is by a democratic way,'' said Palestinian political analyst Ali Jerbawi.

``When calls for changing the leadership come from the outside, they (the Palestinians) do exactly the opposite because they look like a dictate from the outside world. I think in the coming few days we will see Arafat calling for early elections.''

Secretary of State Colin Powell said Tuesday the United States will respect the electoral choice of the Palestinian people and, if they choose Arafat, ``we will deal with the circumstances as we find them.

``The president and all of his advisors ... decided it was the right thing to do for the United States to make the clear statement that the Palestinian people should elect new leadership,'' he told National Public Radio in an interview.

In Hebron, Israeli troops surrounded the hilltop compound, exchanging fire with police. The soldiers then entered the building and searched from room to room, Palestinians said, while forces outside used loudspeakers to demand that Palestinians inside surrender with their hands raised.

Security officials said that the Palestinian security chief, Nizam Jaabri, and about 20 others had turned themselves in. Palestinians said some are suspected of killing five people thought to be collaborators with Israeli intelligence.

The Israeli military said soldiers entered Hebron to operate against the "terrorist infrastructure" there. A military statement said a "large number" of suspects had been arrested. Also, soldiers discovered an explosives laboratory.

Soldiers declared a curfew in the city, confining more than 100,000 Palestinians to their homes, residents said.

The large, old building served the British army when it controlled the area until 1948. Then the Jordanian army took over, and when Israel captured the West Bank in 1967, the Israeli army had its headquarters there.

The 1997 accord left Israel in control of about 20 percent of the city, guarding three enclaves where Jewish settlers live in the center of Hebron.

Also, soldiers arrested 11 Palestinians in the village of Beit Fajjar, near Bethlehem, the military said Tuesday.

Israeli forces hold seven West Bank Palestinian towns in a tight grip, following a decision to move into Palestinian areas in retaliation for bomb attacks. At least 700,000 Palestinians were confined to their homes by army curfews, and Israeli tanks encircled Arafat's headquarters compound in Ramallah.

Electricity and water were still functioning in Arafat's headquarters, unlike the situation during his last extended confinement. Arafat ventured down the front steps Tuesday, making comments to the press and waving goodbye to visiting French Foreign Minister Dominique de Villepin under the watch of Israeli soldiers.

Though able to receive visitors, Arafat is unable to leave the compound; an armored personnel carrier blocked the front gate and bulldozers have fortified barricades around the compound.

Only Jericho, isolated in the Jordan Valley, was free of Israeli troops.

Reacting to Bush's speech, Arafat issued a statement calling it a "serious effort to push the peace process forward."

However, other Palestinians were hard-pressed to find anything positive. Palestinian Cabinet Minister Saeb Erekat said Bush's call for a new leadership was "not acceptable." Palestinian Cabinet Secretary Ahmed Abdel Rahman said that Bush "mixed up" the concepts of terrorism and resistance to Israeli occupation.

Israelis were pleased with the speech, but joined the Palestinians in expressing doubts about the concept of a provisional Palestinian state, an idea neither side appeared to understand.

Prime Minister Ariel Sharon's spokesman, Raanan Gissin, welcomed Bush's call for a new Palestinian leadership "not compromised by terror." Gissin said, "When they chose Arafat, they chose a strategy of terror, and they chose to continue sending suicide and homicide bombers to Israel."

At the Karni crossing between Israel and Gaza early Tuesday, Israeli soldiers shot and killed a Palestinian who was throwing grenades, the military said. The Palestinian belonged to the militant group Islamic Jihad, the group said in a statement faxed to The Associated Press.

In Gaza on Monday, an Israeli helicopter fired three missiles at a car in Rafah, a town on the border with Egypt, where there are frequent clashes between Palestinians and Israeli forces. The car was turned into a smoking, twisted wreck.

The Israeli military said the target was Yasser Rizik, the Rafah commander of the Hamas military wing, who died instantly. Five others were killed, including four Hamas activists, the group said.

Speaking in Israel's parliament, Sharon announced, "We are preparing massive activity against Hamas in the (Gaza) Strip," and pointed to the helicopter strike as the first chapter.

Hamas leaders threatened revenge against Israel. "We emphasize our right to continue the jihad (holy war) and resistance, and to intensify the martyrdom operations," Hamas said in a statement. "Martyrdom operations" is the term Hamas uses for suicide attacks.