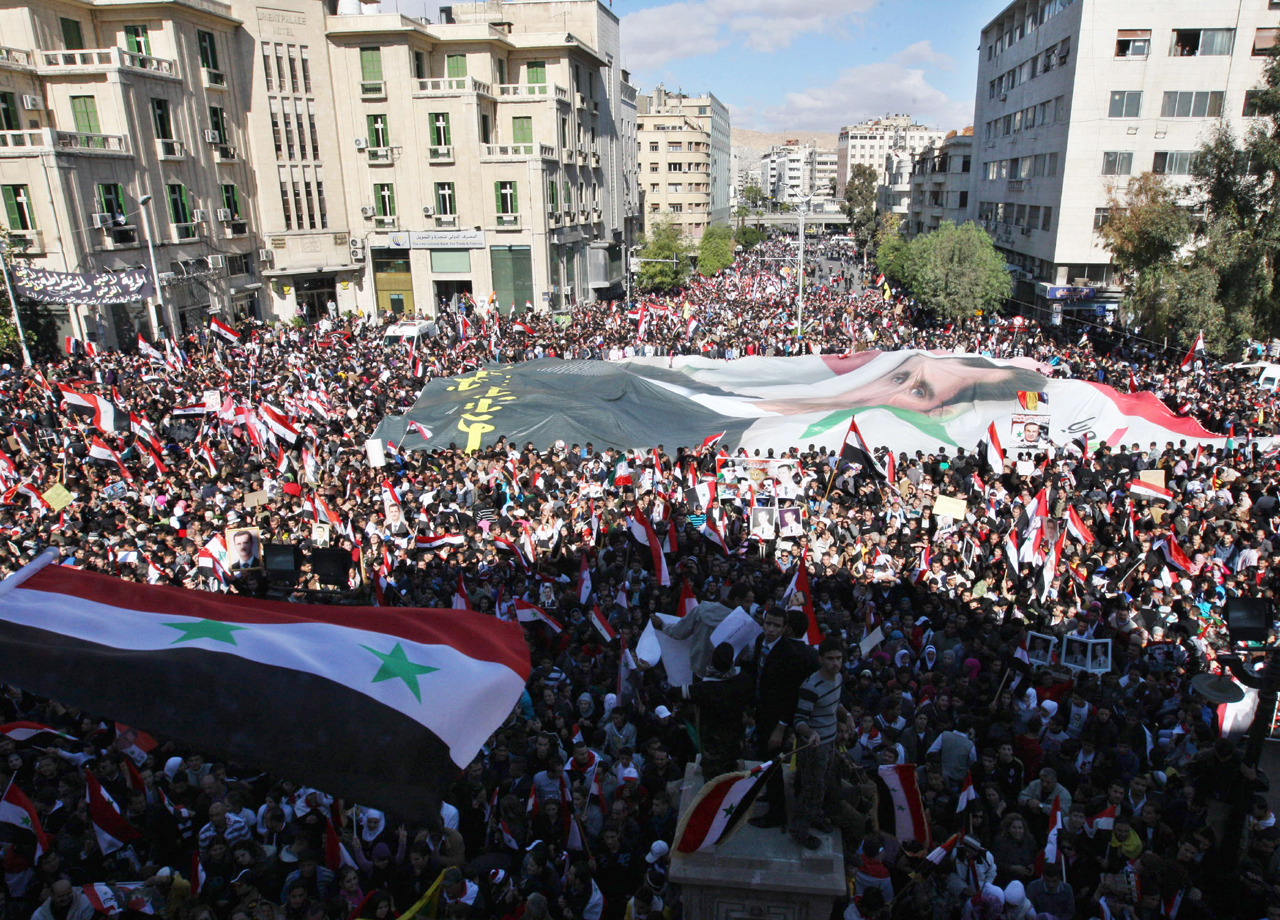 DAMASCUS - Blaring horns, sirens, motorcades and rallies are the order of day and night in the Syrian capital as hundreds of thousands of people stage massive daily exhibitions of fidelity and devotion for President Bashar Assad, who is facing international isolation for his crackdown on an 8-month-old unrest that some say could easily spiral into a civil war.

The streets are clogged by convoys of cars, their young drivers whooping deliriously and tooting their horns in a cacophony of fervor to show the world that Assad still enjoys unwavering support.

"Bashar, Bashar, Bashar," people yell on one of Damascus' chilly nights, as their cavalcades of hundreds of cars, shrouded with Syrian flags and portraits of their president, snarl traffic in this small city of five million, reputedly the oldest inhabited city in the world.

Nightly street parties, tradition dabke dancing and rallies create a festive, jubilee-like atmosphere reminiscent to the run-up of the presidential referendums in 2000 and 2007.

So big was the crowd in the Hijaz Square on Sunday that traffic was put to a standstill, and shops and schools were forced to close. The marchers cut across social and national divides. A few hundred were carrying a huge picture of Assad and chanting concerted slogans over and over.

"Bashar is our hope for the future. He has done his best to serve Syria and protect it," screamed Ahmed, a public worker. He was carrying the Syrian flag in one hand and Assad's picture in the other.

Regional and international states have stepped up efforts to isolate the 46-year-old Syrian leader for what they say is his refusal to end a crackdown on pro-democracy protesters which the U.N. says has killed 3,500 since March.

The Arab League this week suspended Syria from the 22-member organization for failing to abide by a peace plan it brokered to end the crisis. But Syria, which called the suspension illegal and a product of U.S. pressure, agreed in principle to allow dozens of Arab observers into the country to see what is going on the ground, a significant concession from a hardline regime that loathes any sort of outside interference.

On Sunday the AL, meeting in Cairo, said it rejected amendments proposed by Syria, saying the changes put forward alter the "essence" of the peace plan.

The Syrian government blames the ongoing unrest on a foreign plot to destabilize Syria, saying extremists and terrorists - not true reform-seekers - are driving the calls to oust him.

Opposition activists said last Wednesday that armed defectors mounted a daring attack on a Syrian military intelligence headquarters on the outskirts of the capital, Damascus where security has become tight over the past few days. Armed soldiers could be seen in the main squares and piazzas.

There was no comment from the Syrian government and no independent confirmation of the reported attack on the Air Force intelligence facility in Harasta. (Syria has restricted access to journalists, making it almost impossible to verify assertions of attacks and casualties.)

If true, the reported strike could represent a new escalation in the conflict.

Syria's allies in Russia have called for urgent talks between Damascus and the opposition, saying an attack by Syrian renegade troops on a government building looks like the start of a civil war.

In October, Russia (along with China) vetoed a U.N. Security Council resolution that threatened sanctions against Syria. There was no sign that Russia's support for Damascus was wavering.

Despite the opposition protests, Moscow, and some other countries, say Assad still maintains considerable support, especially among minorities fearing a civil war and in major cities such as Damascus, Aleppo and Latakia.

In the capital, billboards proclaim, "We Believe in Freedom, We Believe in History, We Believe in You." New songs, created especially to display solidarity with Assad, blare from loudspeakers, cars and shops.

The National Progressive Front in Syria, a political coalition of 10 parties led by the ruling Baath Party, has said it was standing behind Assad against the "conspiracy," as Radio Damascus, in a political commentary, stressed that "people's awareness and trust is a source of pride."

Daily reminders of Assad's accomplishments have appeared in the local official press: Effusive editorials lavishing praise on the president who took over from his father, Hafez (who ruled the country for more than 30 years) and transformed a turbulent, coup-plagued French territory into one of the Middle East's major powers.

Heavy emphasis is given on Assad's role as a loyal Arab leader, dedicated to all Arab causes. For most Arabs the most eminent cause is solidarity and recovery of lands won by Israel in the 1967 Middle East war. Those lands are still at stake in the peace talks between Syria and Israel, which have been suspended since 2000.

Assad has said the region will burn if foreign powers try to intervene, and his warning has a chilling truth to it.