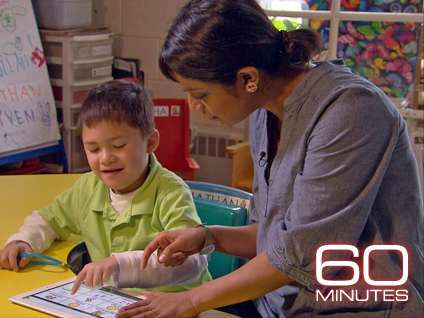 For severely autistic people, communication is often impossible, leaving them unable to convey what they want or need. But as Lesley Stahl reports, touch-screen apps designed for tablet computers like the iPad are now giving autistic people new ways to express themselves, some for the first time. Teachers and parents are hailing the technology as a breakthrough, one that can reveal the true depth of knowledge and emotion trapped behind a wall of silence.

The following script is from "Apps for Autism" which aired on Oct. 23, 2011. Lesley Stahl is the correspondent. Karen Sughrue, producer.

In the weeks since Steve Jobs died, there has been an outpouring of gratitude from his fans for the way his inventions, like the iPad, changed their lives.

Among the most passionate are parents of children with severe forms of autism, especially those who can't speak and appear hopelessly locked inside themselves. Those parents often say these kids understand more and know more than they're able to communicate.

Well now, with the iPad and other tablet computers spreading through the autism community, some of those parents are finding out they were right.

It turns out that autistic children show a real interest in the iPad with its easy touch-and-swipe screens. With specially-designed applications, or apps, these computers are helping them communicate and unlocking the isolation of people like 27-year-old Joshua Hood.

...having to poke out words on a laminated piece of paper - one letter at a time.

It was so frustrating for Josh, his mother Nancy says he would often give up and retreat into himself. At family gatherings, he was sidelined because no one understood him. At school, he sat passively in class unable to participate. When Josh was feeling bad or really needed something, the family resorted to charades.

Stahl: You'd act it out almost?

Nancy: He would. He would-- he would look around a room and see if he could find somethin' that sounded like it.

Stahl: Just to tell you one little thing?

Nancy: One thing that he wanted, yes.

[Waitress: How are you?]

For the past year, Josh has been using an Apple iPad as his voice and he is - well, he's reborn!

[Waitress: What are we havin' to eat today, Josh?

Now when he goes to the local diner, he can order his breakfast, himself. Josh's mom downloaded a special language app and added pictures, videos and symbols that allow him to convey his feelings.

And what he watches on TV!

My first "60 Minutes" interview on an iPad! I asked about his brother Jimmy.

Stahl: And how old is Jimmy?

Stahl: So he's one year younger than you are? Is he your best friend? Does that mean you love him? Yeah.

Josh is typical of people with autism in that he rarely looked directly at me; he rocks, and he has obsessions: in his case, it's World War II.

His therapist Tammy Taylor will never forget the first time she put the iPad into his hands: what had been bottled up inside him began to pour out.

Tammy Taylor: It just blew me away that he could actually tell me his brother had a goatee and was bald.

Taylor: Absolutely. He's part of the community. I mean, communication is the essence of being human. And here he is, communicating fully now.

The language app that Josh uses is called "Proloquo2go."

But there are other apps created specifically for autistic people: like "AutismXpress" to help children identify emotions.

And another called "Look in My Eyes" to practice eye contact.

Stahl: How do you feel about being on TV? Can you show me on there?

Stahl: Tell me what's happening inside of you as your son starts to tell you what-- what he's been thinking. He's probably been trying to tell you for 27 years.

Nancy: Mind boggling, to tell you the truth. I always had said when he was younger, it was like, you know, he was a computer and I was computer illiterate. And I didn't know how to press the right keys-- sorry-- to-- to get him to communicate. It was just, you know, that-- that was the hard part, is you knew there was more in there, and you didn't know how to get it out.

Touch screen computers help Josh communicate. Can they do the same for these children at the Beverley School in Toronto, Canada - where half the students are severely autistic and more impaired than Josh?

The day we were there, kindergarten teacher Sabrina Morey struggled to figure out why seven-year-old Nathan was so upset.

Stahl: It's frustrating for you. What about for them?

Morey: It can be very frustrating.

For the past year, Morey and her fellow teachers Ian Stuart and Stacie Carroll have been involved in the first study to find out just how effective the iPad is with their students.

Stahl: Has the iPad made any difference, Stacie?

Stacie Carroll: The iPad has made a huge difference. There's something--

Carroll: --about using the iPad that draws the students in. They're engaged with it in a way that we don't see with other toys or puzzles or teaching tools.

The study has found that it improves the children's willingness to socialize, something autistic kids have trouble with, and it enhances their attention spans.

[Carroll: Can you look at the numbers, Jennifer?]

In this video, recorded by the school, Stacie's trying to get little Jennifer to focus on learning to count, using the old paper method.

Carroll: No, she's not looking at it.

But what a difference with the iPad.

Stahl: Totally. I hear that autistic children often prefer machines to having an interaction with a human being. Is that what we're seeing?

But the teachers are finding that as with autism in general, there's a range of ability when it comes to benefiting from the iPad.

Stahl: When he likes something, he lights up.

I sat down with Sabrina and Nathan.

And as I watched, he repeatedly ignored her requests...

Morey: You choose a letter.

And she stepped in again and again to guide his hand. I wondered just how much he was learning on the iPad.

Morey: Which letter would you like to look at? Sometimes I have to hold my hand over it, because otherwise he will just go in and out of programs.

Ian Stuart: What I found is that the device, the iPad isn't for everyone. It's not for all my students. But the ones who are engaged by it - it's really...it's amazing!

[Stuart: Do you want to do some work?

It was thought that 10-year-old Nuno - who doesn't talk - had the IQ and attention span of a toddler.

[iPad: Touch the one that is a healthy snack.

So when Ian tested him with a new vocabulary app, he was surprised by how much he knew.

[iPad: Where is the wind chime? Great job. Touch the soldier. Yay. Super.]

Stahl: Did you know he knew all those words?

Stuart: No. Absolutely not.

Stahl: You had no idea?

Stuart: No idea. No idea to the extent of his vocabulary.

[iPad: Find the saxophone. Yay, you did it.]

Stahl: Saxophone. How did he know a saxophone? Right?

Stuart: And we've just recently found out that he has quite a love of classical music and opera. So he's-- he's--

Stahl: He has love of opera?

Stuart: Yes, he does.

Stahl: And you didn't know it.

Stahl: Did that come through the iPad?

Stuart: It came through exploring music selections on-- on the iPad. And as a reward sometimes we let him watch some videos in class and Pavarotti or some arias. And he likes conductors. He likes symphonies.

Stahl: You're discovering that there's more inside these children's heads than you realized?

Morey: And that's something in a way I feel like we've known. But this is giving us a tool to really show us and prove that there is more happening.

Figuring out why so many autistic people are unable to speak - as many as 30 percent of them - is the subject of a major new research study at the University of Pittsburgh.

Dr. Walter Schneider: We don't have a biological marker for autism in most cases at the moment.

Neuro-scientist Dr. Walter Schneider, is investigating whether the language problems in autism are caused by a disruption in the brain's connective circuits.

[Schneider: What we're gonna do now is the motor mapper.]

He invited Temple Grandin, the renowned professor of animal science and author of five books on autism, to have her brain scanned as his first subject.

Grandin has Asperger's, a high-functioning form of autism, but she had trouble learning to speak.

Temple Grandin: My speech started coming in around, you know.. three, three and a half. A few stressed words at a time. Like I'd say "Bah" for ball.

Stahl: This is a normal brain?

Schneider: This is a normal brain.

First he showed us the fibers that make up the language circuit in a normal brain - a streamlined bundle with off ramps at the top. But what about in a brain with autism, like Temple Grandin's.

Schneider: Yes. We're going to show the inside of Temple's brain.

What I saw floored me.

Stahl: What did you think when you saw that? That is Temple-- that is that. That is that?

Schneider: That is this section and how it projects out.

Schneider thinks this dramatic disorganization of the wiring may explain the language impairments seen in autism, but he won't know for sure until he scans more people. He hopes, among other things, that one day a brain scan will be able to diagnose autism early and tell parents if their child will ever speak.

Meantime, parents like Amanda Williams - Nathan's mother, are latching onto the iPad. Marveling at how the device is opening windows into their children's minds...even if the windows are only open a crack.

Williams: I can't express to you enough, like, how amazing it is to watch him take his little finger and go like that in a controlled way. I think the thing that made us cry was when he flipped through it and then he saw the tiger. And he went, "Oh, I gotta go back," and went boom. And he looked at us with this smile on his face. And he's like, "I did it."

Stahl: And it's such a tiny little thing.

Williams: It's a tiny thing.

Williams: We don't know what the future holds for him in terms of speech. We'd like to think and we still hope that one day speech will come in whatever form. But if it doesn't and if it's not perfect--

Stahl: This will be his voice.

Williams: --this will be his voice.

Investigating who betrayed Anne Frank and her family to the Nazis
Thanks for reading CBS NEWS.
Create your free account or log in
for more features.
View CBS News In
CBS News App Open
Chrome Safari Continue
Be the first to know
Get browser notifications for breaking news, live events, and exclusive reporting.