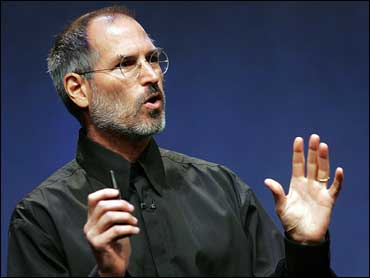 The Skinny is Keach Hagey's take on the top news of the day and the best of the Internet.

At last, the great Steve Jobs' Achilles heel is revealed! Except it's more like a wrist, surrounded by a conspicuously button-free cuff.

The Wall Street Journal fronts its paper today with a reach-around profile revealing that the Apple mogul has a pathological fear and loathing of buttons.

And it goes way beyond the sleekly buttonless iPhone. The elevator in Apple's Tokyo stores has no floor buttons, forcing vistors to stop at every floor. That trademark black turtleneck that's become his uniform for public appearances? See any buttons on that? And let's not even get into his fight over putting buttons on the mouse, or requirement that early Macs be designed without arrow keys.

Apparently, anyone threatened by Jobs need only hold up one of those all-in-one stereo-TV-VCR-DVD remote controls to send him shrieking back to the shadows like Dracula confronted by a crucifix.

For most of his career, the button-banishing seemed like strokes of genius, but today's papers suggest that run might be at an end. The New York Times also report that Apple's shares slumped six percent on Tuesday after AT&T said the early surge of iPhone buyers starting service on its network was smaller than some analysts anticipated.

The Times charitably inserts a caveat, that AT&T's number "could also reflect the difficulty many iPhone customers had in activating their phones during the first few days." Might it have been easier if they'd had buttons?

In a speech yesterday before a military audience in the same South Carolina town that hosted the first Democratic presidential debate, President Bush tried once again to tie Iraqi insurgents to 9/11 —- this time by pointing to newly declassified intelligence that says al Qaeda in Iraq takes orders from Osama Bin Laden.

But congressional Democrats, intelligence experts and the press weren't buying it. The Wall Street Journal led its worldwide newsbox with the item, but prefaced news of the speech with the concerns of "critics who charge that conflating the two is a dishonest attempt to justify a mistaken war."

The Los Angeles Times allowed Bush to toss off a few classically folksy, confusing metaphors —- such as comparing the doubting that al Qaeda in Iraq is a threat to America to "watching a man walk into a bank with a mask and a gun and saying he's probably just there to cash a check" —- before quoting a series of intelligence experts refuting his claims.

For example, Bruce Hoffman of Georgetown University, a "veteran counter-terrorism analyst and government consultant," told the LA Times "that the vast majority of fighters who are part of al Qaeda in Iraq are Iraqis who have shown little interest in seeking targets beyond that country's borders."

Or Rand Beers, a former senior Bush and Clinton administration counter-terrorism official, who said: "There is no question that [Bush] is oversimplifying what is happening in Iraq. He is misrepresenting where the major front of al Qaeda is, which is in Pakistan."

The New York Times quoted White House spokesman Kevin Sullivan, who called the speech a "'surge of facts' meant to rebut critics who say Mr. Bush is trying to rebuild support of the war by linking the Iraq group and the one led by Mr. Bin Laden." The paper's editors then did their best to stop the progress of the surge by burying the story on page A8.

The Housing Slump Moves Into The Master Bedroom

The New York Times leads with dismal news that Counrywide Financial, the nation's largest mortage lender, announced yesterday that more borrowers with good credit were falling behind in their loans. Up to now, the slump has been blamed on defaults in the sub-prime market. Countrywide's chairman said home prices were falling "almost like never before, with the exception of the Great Depression."

The Los Angeles Times also gives front-page space to Countrywide's announcement --which "sent shivers down Wall Street, helping to trigger a 226-point plunge in the Down Jones industrial average" -- in a story about record foreclosures in California.

"Although a relatively small fraction of homeowners face eviction," the LA Times notes, "the concern is that a flood of foreclosures will further weaken housing prices -- and make people less willing to spend money."

A NOTE TO READERS: The Skinny is now available via e-mail. Click here and follow the directions to register to receive it in your inbox each weekday morning.