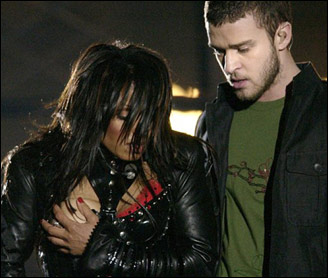 (CBS/AP) PHILADELPHIA - The battle over the 2004 Super Bowl's infamous "wardrobe malfunction" is still going on.

A federal appeals court on Wednesday upheld its finding that the Federal Communications Commissions acted improperly in fining CBS over the fleeting exposure of Janet Jackson's breast during that year's halftime show.

A three-judge panel from 3rd Circuit Court of Appeals in Philadelphia ruled that the FCC improperly assessed a $550,000 fine against the network over the incident, which lasted just over half a second.

During the Super Bowl performance in Houston, Justin Timberlake ripped off Jackson's bustier, briefly exposing her breast and a silver sunburst "shield" covering her nipple. In arguments last year, the FCC argued that CBS should have been aware the performers might add shock value to the act.

The network countered that regulators were now trying to apply different standards to words and images despite previously excusing fleeting instances of both.

The Supreme Court last year ordered the appeals panel to reconsider its 2008 decision, citing a ruling in a Fox television-led challenge, when it said the FCC could threaten fines over the use of a single curse word on live TV.

In the majority opinion, 3rd Circuit Judge Marjorie Rendell wrote that the Fox opinion did nothing to undermine the earlier decision on the CBS fine and, in fact, confirms the appeals panel's ruling.

The FCC "arbitrarily and capriciously departed from its prior policy excepting fleeting broadcast material" in assessing the fine, Rendell wrote.

The same panel initially sided with the network in 2008.