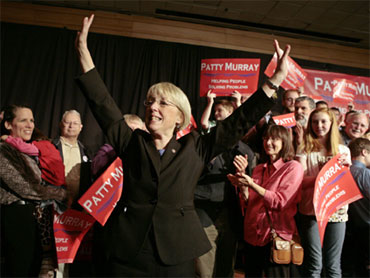 In winning, Murray preserves breathing room for the Senate's shrunken Democratic majority after Republicans took control of the House for the rest of President Barack Obama's first term. Obama campaigned for Murray twice, including a 10,000-person Seattle rally just as voters were receiving their ballots.

Rossi's website has a statement from him on its "Press" page. It reads in part, "This evening, I called Senator Murray to offer my congratulations on her re-election to the U.S. Senate."

Murray's victory was secured Thursday as tallies pushed her lead to about 46,000 votes out of more than 1.8 million counted, or about 51 percent to 49 percent. About three-quarters of the expected ballots had been counted in unofficial returns.

Hundreds of thousands of ballots still await processing, but an Associated Press analysis determined Murray's lead would be insurmountable.

Rossi issued a statement Thursday evening saying he had called Murray to congratulate her.

Murray's campaign offered a strong defense of her ability to win federal spending, even in a year when economic jitters threatened to derail that traditional strength for sitting senators. The list of projects she touted was seemingly endless: Bridges, highways, veterans' hospitals, dams, port construction and more.

Murray also sought to paint Rossi as a friend of big business, pointing to his call to repeal the Democrats' new Wall Street regulations.

Rossi's campaign was relentlessly focused on Murray's spending record, including the sometimes intertwining paths of Murray's campaign contributors and her "earmarks" for pet projects. He argued that the one-time underdog candidate had changed over 18 years in Washington, D.C., and had to be replaced to secure the nation's economic future.

The campaign was expensive and smothered Washington airwaves with advertising - much of it sharply negative in tone. Murray spent nearly $15 million through September to Rossi's roughly $2.5 million, but a flood of outside money helped Rossi keep up.

It was Rossi's third statewide loss in six years. He nearly won the 2004 governor's race, losing by just 133 votes after a long court fight. Rossi lost a second gubernatorial race in 2008.