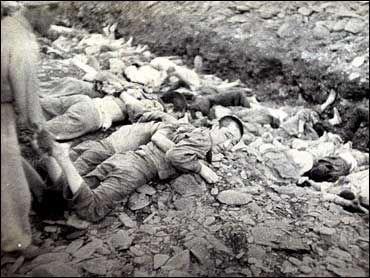 The Associated Press has previously reported on the hidden history of mass executions by South Korea early in the Korean War. The following report looks in-depth at the U.S. connection.
By Associated Press Writers Charles J. Hanley and Jae-Soon Chang.

The American colonel, troubled by what he was hearing, tried to stall at first. But the declassified record shows he finally told his South Korean counterpart it "would be permitted" to machine-gun 3,500 political prisoners, to keep them from joining approaching enemy forces.

In the early days of the Korean War, other American officers observed, photographed and confidentially reported on such wholesale executions by their South Korean ally, a secretive slaughter believed to have killed 100,000 or more leftists and supposed sympathizers, usually without charge or trial, in a few weeks in mid-1950.

Extensive archival research by The Associated Press has found no indication Far East commander Gen. Douglas MacArthur took action to stem the summary mass killing, knowledge of which reached top levels of the Pentagon and State Department in Washington, where it was classified "secret" and filed away.

Now, a half-century later, the South Korean government's Truth and Reconciliation Commission is investigating what happened in that summer of terror, a political bloodbath largely hidden from history, unlike the communist invaders' executions of southern rightists, which were widely publicized and denounced at the time.

In the now-declassified record at the U.S. National Archives and other repositories, the Korean investigators will find an ambivalent U.S. attitude in 1950 - at times hands-off, at times disapproving.

"The most important thing is that they did not stop the executions," historian Jung Byung-joon, a member of the 2-year-old commission, said of the Americans. "They were at the crime scene, and took pictures and wrote reports."

They took pictures in July 1950 at the slaughter of dozens of men at one huge killing field outside the central city of Daejeon. Between 3,000 and 7,000 South Koreans are believed to have been shot there by their own military and police, and dumped into mass graves, said Kim Dong-choon, the commission member overseeing the investigation of these government killings.

The bones of Koh Chung-ryol's father are there somewhere, and the 57-year-old woman believes South Koreans alone are not to blame.

"Although we can't present concrete evidence, we bereaved families believe the United States has some responsibility for this," she told the AP, as she visited one of the burial sites in the quiet Sannae valley.

Frank Winslow, a military adviser at Daejeon in those desperate days long ago, is one American who feels otherwise.

The Koreans were responsible for their own actions, said the retired Army lieutenant colonel, 81. "The Koreans were sovereign. To me, there was never any question that the Koreans were in charge," he said in a telephone interview from his home in Bellingham, Wash.

The brutal, hurried elimination of tens of thousands of their countrymen, subject of a May 19 AP report, was the climax to a years-long campaign by South Korea's right-wing leaders.

In 1947, two years after Washington and Moscow divided Korea into southern and northern halves, a U.S. military government declared the Korean Labor Party, the southern communists, to be illegal. President Syngman Rhee's southern regime, gaining sovereignty in 1948, suppressed all leftist political activity, put down a guerrilla uprising and held up to 30,000 political prisoners by the time communist North Korea invaded on June 25, 1950.

As war broke out, southern authorities also rounded up members of the 300,000-strong National Guidance Alliance, a "re-education" body to which they had assigned leftist sympathizers, and whose membership quotas also were filled by illiterate peasants lured by promises of jobs and other benefits.

Commission investigators, extrapolating from initial evidence and surveys of family survivors, believe most alliance members were killed in the wave of executions.

On June 29, 1950, as the southern army and its U.S. advisers retreated southward, reports from Seoul said the conquering northerners had emptied the southern capital's prisons, and ex-inmates were reinforcing the new occupation regime.

In a confidential narrative he later wrote for Army historians, Lt. Col. Rollins S. Emmerich, a senior U.S. adviser, described what then happened in the southern port city of Busan, formerly known as Pusan.

Emmerich was told by a subordinate that a South Korean regimental commander, determined to keep Busan's political prisoners from joining the enemy, planned "to execute some 3500 suspected peace time Communists, locked up in the local prison," according to the declassified 78-page narrative, first uncovered by the newspaper Busan Ilbo at the U.S. National Archives.

Emmerich wrote that he summoned the Korean, Col. Kim Chong-won, and told him the enemy would not reach Busan in a few days as Kim feared, and that "atrocities could not be condoned."

But the American then indicated conditional acceptance of the plan.

"Colonel Kim promised not to execute the prisoners until the situation became more critical," wrote Emmerich, who died in 1986. "Colonel Kim was told that if the enemy did arrive to the outskirts of (Busan) he would be permitted to open the gates of the prison and shoot the prisoners with machine guns."

This passage, omitted from the published Army history, is the first documentation unearthed showing advance sanction by the U.S. military for such killings.

"I think his (Emmerich's) word is so significant," said Park Myung-lim, a South Korean historian of the war and adviser to the investigative commission.

As that summer wore on, and the invaders pressed their attack on the southern zone, Busan-area prisoners were shot by the hundreds, Korean and foreign witnesses later said.

Emmerich wrote that soon after his session with Kim, he met with South Korean officials in Daegu, 55 miles (88 kilometers) north of Busan, and persuaded them "at that time" not to execute 4,500 prisoners immediately, as planned. Within weeks, hundreds were being executed in the Daegu area.

The bloody anticommunist purge, begun immediately after the invasion, is believed by the fall of 1950 to have filled some 150 mass graves in secluded spots stretching to the peninsula's southernmost counties. Commissioner Kim said the commission's estimate of 100,000 dead is "very conservative." The commission later this month will resume excavating massacre sites, after having recovered remains of more than 400 people at four sites last year.

The AP has extensively researched U.S. military and diplomatic archives from the Korean War in recent years, at times relying on once-secret documents it obtained through Freedom of Information Act requests and declassification reviews. The declassified U.S. record and other sources offer further glimpses of the mass killings.

A North Korean newspaper said 1,000 prisoners were slain in Incheon, just west of Seoul, in late June 1950 - a report partly corroborated by a declassified U.S. Eighth Army document of July 1950 saying "400 Communists" had been killed in Incheon. The North Korean report claimed a U.S. military adviser had given the order.

As the front moved south, in July's first days, Air Force intelligence officer Donald Nichols witnessed and photographed the shooting of an estimated 1,800 prisoners in Suwon, 20 miles south of Seoul, Nichols reported in a little-noted memoir in 1981, a decade before his death.

Around the same time, farther south, the Daejeon killings began.

Winslow recalled he declined an invitation to what a senior officer called the "turkey shoot" outside the city, but other U.S. officers did attend, taking grisly photos of the human slaughter that would be kept classified for a half-century.

Journalist Alan Winnington, of the British communist Daily Worker newspaper, entered Daejeon with North Korean troops after July 20 and reported that the killings were carried out for three days in early July and two or three days in mid-July.

He wrote that his witnesses claimed jeeploads of American officers "supervised the butchery." Secret CIA and Army intelligence communications reported on the Daejeon and Suwon killings as early as July 3, but said nothing about the U.S. presence or about any U.S. oversight.

In mid-August, MacArthur, in Tokyo, learned of the mass shooting of 200 to 300 people near Daegu, including women and a 12- or 13-year-old girl. A top-secret Army report from Korea, uncovered by AP research, told of the "extreme cruelty" of the South Korean military policemen. The bodies fell into a ravine, where hours later some "were still alive and moaning," wrote a U.S. military policeman who happened on the scene.

Although MacArthur had command of South Korean forces from early in the war, he took no action on this report, other than to refer it to John J. Muccio, U.S. ambassador in South Korea. Muccio later wrote that he urged South Korean officials to stage executions humanely and only after due process of law.

The AP found that during this same period, on Aug. 15, Brig. Gen. Francis W. Farrell, chief U.S. military adviser to the South Koreans, recommended the U.S. command investigate the executions. There was no sign such an inquiry was conducted. A month later, the Daejeon execution photos were sent to the Pentagon in Washington, with a U.S. colonel's report that the South Koreans had killed "thousands" of political prisoners.

The declassified record shows an equivocal U.S. attitude continuing into the fall, when Seoul was retaken and South Korean forces began shooting residents who collaborated with the northern occupiers.

When Washington's British allies protested, Dean Rusk, assistant secretary of state, told them U.S. commanders were doing "everything they can to curb such atrocities," according to a Rusk memo of Oct. 28, 1950.

But on Dec. 19, W.J. Sebald, State Department liaison to MacArthur, cabled Secretary of State Dean Acheson to say MacArthur's command viewed the killings as a South Korean "internal matter" and had "refrained from taking any action."

It was the British who took action, according to news reports at the time. On Dec. 7, in occupied North Korea, British officers saved 21 civilians lined up to be shot, by threatening to shoot the South Korean officer responsible. Later that month, British troops seized "Execution Hill," outside Seoul, to block further mass killings there.

To quiet the protests, the South Koreans barred journalists from execution sites and the State Department told diplomats to avoid commenting on atrocity reports. Earlier, the U.S. Embassy in London had denounced as "fabrication" Winnington's Daily Worker reporting on the Daejeon slaughter. The Army eventually blamed all the thousands of Daejeon deaths on the North Koreans, who in fact had carried out executions of rightists there and elsewhere.

An American historian of the Korean War, the University of Chicago's Bruce Cumings, sees a share of U.S. guilt in what happened in 1950.

"After the fact - with thousands murdered - the U.S. not only did nothing, but covered up the Daejeon massacres," he said.

Another Korean War scholar, Allan R. Millett, an emeritus Ohio State professor, is doubtful. "I'm not sure there's enough evidence to pin culpability on these guys," he said, referring to the advisers and other Americans.

The swiftness and nationwide nature of the 1950 roundups and mass killings point to orders from the top, President Rhee and his security chiefs, Korean historians say. Those officials are long dead, and Korean documentary evidence is scarce.

To piece together a fuller story, investigators of the Truth and Reconciliation Commission will sift through tens of thousands of pages of declassified U.S. documents.

The commission's mandate extends to at least 2010, and its president, historian Ahn Byung-ook, expects to turn then to Washington for help in finding the truth.

"Our plan is that when we complete our investigation of cases involving the U.S. Army, we'll make an overall recommendation, a request to the U.S. government to conduct an overall investigation," he said.