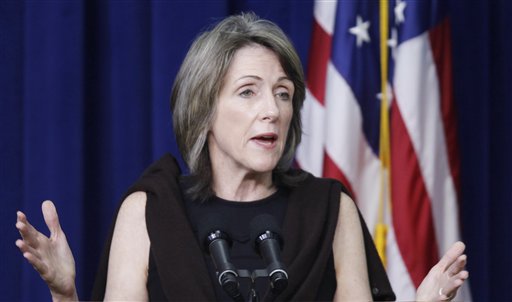 The group of Cabinet secretaries and White House advisers who meet regularly to craft the president's energy and environmental agenda now numbers 13, double what it was during the administration's early days.

It's just one of the signs that the administration is stepping up its push to pass energy and climate legislation this year, as the Senate continues to wrangle with Obama's other top domestic priority, health care reform. The House has already passed a bill.

Since the summer, when everyone else's attention was focused on the heated town hall meetings over health care, Obama administration officials have been meeting with more than half the Senate, made calls to nearly 100 mayors in 17 states, and met with numerous governors, according to White House records. Their goal, according to Carol Browner, the president's assistant for energy and climate change, "is to get the bill moving and keep it moving."

"It's really engaging a wide array of people across the administration to make sure that we're answering the questions that the Senate needs answered and working with individual members as they think about how they can support comprehensive energy legislation," Browner said Thursday in an interview with The Associated Press. "It's just grown and grown and grown, with more and more Cabinet agencies and secretaries wanting to be involved."

In the days and hours before the House vote in June, White House officials and the president himself pressed reluctant lawmakers to vote for the legislation. The bill passed narrowly, 219-212. The climb to 60 votes in the Senate is expected to be even more steep, and it comes as the administration is under pressure to make progress on climate change before international negotiations in Copenhagen in December. The Senate bill would cut greenhouse gases 80 percent by 2050.

There has also been a permanent White House representative at a weekly meeting of nearly 20 senators working to advance the legislation, Kerry said.

"Now there will be a more unified meeting process between senators and the administration in order to lock things in," said Kerry. "We are getting into the stage of negotiations where people need to close."

Browner was scheduled to meet later Thursday with a group of five Democratic senators concerned about the cost curbing greenhouse gases will have on their home-state industries. Their votes are crucial for the measure to pass.

"It's important for us to get right from the senators their thinking," Browner said. "As the bill starts to move ... we want to make sure that we in the administration know what members are most focused on and what's going to be key to ensuring their support for comprehensive energy legislation."

How much support the administration is getting is unclear. Kerry on Thursday acknowledged that the bill had a long way to go. His co-sponsor Sen. Barbara Boxer, D-Calif., said Sunday during an interview on C-SPAN that she did not have the 60 votes. Hearings on the measure may also be pushed back to later in October to wait for an EPA analysis of the legislation.

Browner would not handicap the bill Thursday, saying only that she wanted the legislation "to be as far along as we possibly can be."

In a sign of how important a domestic bill is to the White House's efforts, Browner has no plans yet to attend the U.N. conference in Copenhagen _ and she says she won't be going if the bill is till working its way through Congress.

"Obviously, we'd love to sign the bill" into law before then, Browner said. "I don't think that is going to happen."