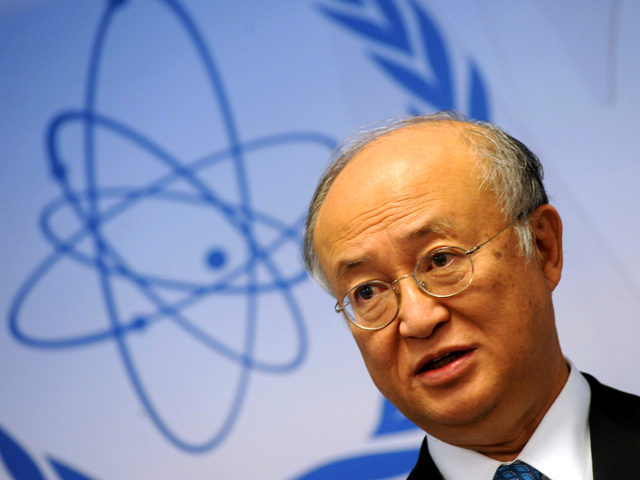 (CBS/AP) VIENNA - Diplomats say the U.N. atomic agency has new intelligence that Iran has advanced its work on calculating the destructive power of a nuclear warhead, a step toward building such a weapon.

The diplomats say the information — from the U.S., Israel and at least one other country — alleges the research was done within the past three years.

Iran denies that it has worked on nuclear arms and says allegations to the contrary are based on fabricated intelligence.

But the International Atomic Energy Agency (IAEA) gives credence to the suspicions and says it cannot disprove them unless Iran starts cooperating with its probe of the allegations.

The information comes from six diplomats who spoke to The Associated Press on condition of anonymity because they were not authorized to discuss intelligence.

The IAEA has been pressing Iran for access to various sites where nuclear-related work is believed to have been carried out, but those requests have intensified in recent months in relation to one site in particular, the .

Suspicion that Parchin was involved in a clandestine nuclear weapons program piqued in March 2012, when satellite imagery showed apparent earth-moving vehicles at Parchin - activity suggesting the Iranians might be trying to clean the site of traces of radiation in the soil.

Mark Fitzpatrick, an expert on Iran's nuclear program and the director of the nonproliferation and disarmament program at the London-based International Institute for Strategic Studies, told CBSNews.com earlier this year that while Parchin "very probably" was home to nuclear-related experiments, and, "Iran very probably is trying to cover up evidence," there is little to suggest any nuclear materials were ever there.

Instead, it's widely believed that the site may have been used to test explosives of the sort necessary to detonate nuclear weapons. That suspicion was drawn based on images showing a reinforced building at the site, surrounded by apparent earth berms, where test explosions could have been conducted at a safe distance from nuclear materials.

On Monday, the head of the IAEA, Yukiya Amano, warned that months of delays were hurting attempts by his agency to look into the concerns at Parchin, which is just southeast of Tehran.

"We need to stop going around in circles," Amano said of the fruitless seven-month IAEA-Iran talks aimed at gaining access to the Parchin site. "This is frustrating."

Asked why there was no progress on the Parchin probe, Amano told reporters: "You'd better ask Iran."

Board members at a closed IAEA meeting last week were shown satellite images of Parchin allegedly documenting months of clean-up at the site, capped last month by what IAEA officials said were photos showing that tarps had been thrown over buildings where the alleged blast experiments took place.

"We have observed extensive activities at the site and we are concerned that these activities will significantly hamper the verification activities of the agency," Amano told reporters, alluding to the satellite images.