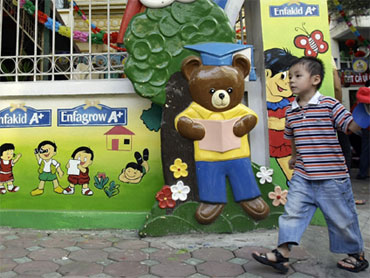 Multinational companies in Vietnam sell baby formula so aggressively that they routinely stretch and sometimes break laws designed to promote breastfeeding, an AP investigation has found.

International guidelines and Vietnamese law recognize breast milk as superior to formula for an infant's health. Yet dozens of interviews with mothers, doctors, health officials and shopkeepers suggest that formula companies pay doctors to peddle their products, promote it for infants under age one and approach mothers and health care workers at health facilities - all of which are against the law.

The number of Vietnamese mothers who exclusively breast-feed in the first six months - the most crucial period - stands at just 17 percent, less than half what it was a decade ago, according to UNICEF.

Meanwhile, formula sales in Vietnam jumped 39 percent in 2008, according to a study by Nielsen, a market research firm. Another survey found that the industry spent more than $10 million on advertising last year, placing it among Vietnam's top five advertisers.

The companies say they follow the law and attribute increased sales to other factors, chiefly more working women with money to spend and less time to breast-feed. Health experts agree that these factors have played a role, but also point to relentless marketing by formula companies.

The aggressive marketing of formula is common across the region, from China to Indonesia to the Philippines, according to the International Code Documentation Center, a Malaysia-based nonprofit that seeks to eliminate the irresponsible marketing of baby foods. While companies often violate the voluntary international milk code, the center says, they are usually careful to follow the letter of individual country laws.

When the Philippine government tried to tighten its advertising laws for milk products two years ago, the companies took it to court.

"The health workers there were part of the marketing arm for those products," said Jean-Marc Olive, Vietnam representative for the World Health Organization, who used to work in the Philippines.

Vietnam's struggle shows how difficult it is for developing countries to take on international companies with hefty advertising budgets and aggressive sales and legal teams.

"The companies have millions of dollars and dozens of lawyers, but the Vietnamese government has a tiny budget and just two people promoting breast-feeding," said Annelies Allain of the International Code Documentation Center.

Among the most serious violations that sources described separately to the AP were commissions paid to doctors to sell formula.

Workers at a women's health clinic in Dong Nai province had an exclusive deal with Dutch Lady, a brand of Friesland Foods, based in Meppel, the Netherlands, said Dr. Vo Thi Kim Loan, the clinic's former vice director.

"We got a small commission for each can," she said.

"We do not compensate doctors, clinics, hospital or their staff for selling or promoting our products," he said, although he acknowledged providing furniture for the clinic, whose waiting room is adorned with a large Dutch Lady logo. 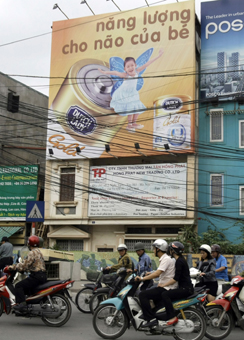 (AP Photo/Chitose Suzuki)
Tran Thi Hanh, the clinic director, said the clinic signed a contract to promote a Dutch Lady powdered milk product for pregnant and nursing mothers, but didn't sell products for babies or receive commissions by the can.

The clinic also printed a Dutch Lady logo on registration forms for women who came for ultrasounds or prenatal check-ups, she said. In return, Hanh said, Dutch Lady provided lunch for about 50 staffers from smaller clinics around the province who came to the bigger clinic for training every three months.

Several other big formula companies also tried to land a deal with the clinic, said Loan, the former vice director. Another clinic employee, who declined to give her name because she still works at the clinic, confirmed Loan's account.

The staff didn't promote formula for babies under six months, Loan said, but they frequently pushed it for babies between six and 12 months. Vietnam's law prohibits advertising formula products for children under age one - a weakened version of an earlier law that set the age limit at 2.

It is illegal to sell infant formula inside Vietnamese hospitals, except in pharmacies, but the alley just outside Hanoi's main maternity hospital is lined with shops prominently displaying American and European brands.

"Most customers are sent by their doctors right after they give birth," said Ngo Thanh, 27, who has worked next to the main maternity hospital for five years. She and other shopkeepers said their customers bring labels or plastic caps from formula tins back to their doctors for documenting sales.

"When we asked for their IDs, they fled," she said.

"Our employees are routinely trained and held to high standards of compliance," said Gail Wood, a spokeswoman for Mead Johnson Nutrition, an American firm based in Glenview, Ill.

But Nguyen Thi Minh, 29, a Hanoi paralegal, said she was approached by a Mead Johnson salesman at a Hanoi maternity clinic shortly before giving birth.

"I chose Mead Johnson's EnfaGrow because the advertisements said it boosts your child's IQ and makes them taller," Minh said.

"They must get mothers' names from the hospitals," she said. "They knew my name, my baby's name and his birthday."

Tracey Noe, a spokeswoman for Abbott of Abbott Park, Illinois, said the company only calls women who sign up for promotions, but the women interviewed by the AP said they had not requested information.

"We provide extensive training to our employees and conduct routine audits to ensure compliance," Noe said.

As Vietnam has embraced market reforms and opened up to outside investment, Western products, including baby formula, have gained cachet. More mothers can afford formula, said Bles of Dutch Lady, whose Vietnam profits surged by 30 percent last year.

Company spokesmen point to statistics showing that many Vietnamese women breast-feed at some point after giving birth. In some categories, Vietnam compares favorably with other developing Asian nations.

But health experts say the one number that truly matters is the percentage of women who exclusively breast-feed their children for the first six months. And in this category, Vietnam fares poorly.

"We are one of the worst in the region, and that has happened over the last eight years," said Marjatta Tovanen-Ojutkangas, head of UNICEF's health and nutrition section in Hanoi.

Breast milk significantly reduces infant mortality, according to international health experts, who recommend that mothers exclusively breast-feed for the first six months and continue breast-feeding, supplemented by solid foods, until their babies are two.

The International Code of Marketing of Breast-Milk Substitutes, sponsored by the World Health Organization and UNICEF, is not legally binding. It is up to individual countries to implement the code by enacting their own laws. Vietnam did so in 1994.

"Just when you think you might have a watertight case, you'll get shot down on a technicality," she said.

In recent years, formula companies have introduced an array of powdered-milk products for older children and mothers. These don't fall under the restrictions of the code or Vietnamese law, so companies can advertise them freely and market their brand.

Nursery schools across Hanoi and Ho Chi Minh City are adorned with the logos of Mead Johnson and U.S.-based Abbott, which have provided benches, playground equipment and other gifts. Companies routinely suggest that children will be smarter and stronger if they drink formula, claims widely rejected by independent health professionals. 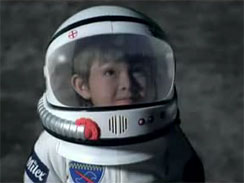 (YouTube )
One television ad for Milex, a Scandinavian brand, shows a young boy dressed up in a NASA uniform, suggesting that powdered milk will make him smart enough to fly to the moon.

Salesmen also often invite women to "child nutrition seminars" at 5-star hotels. About 600 mothers packed a recent Abbott seminar co-sponsored by the Vietnam Nutrition Association, which receives heavy funding from formula companies. They listened to a talk called "Awakening Your Child's Intelligence Potential" and watched a video of a girl learning to talk at 6 months and read at 14 months.

Doctors often appear at these seminars. The ties between the companies and the medical community are very close, said Olive, the WHO representative. Shortly after he arrived in Vietnam, Olive was invited to speak at a pediatrics association meeting and found a formula logo hanging behind the podium.

"I turned it around before speaking," he said.