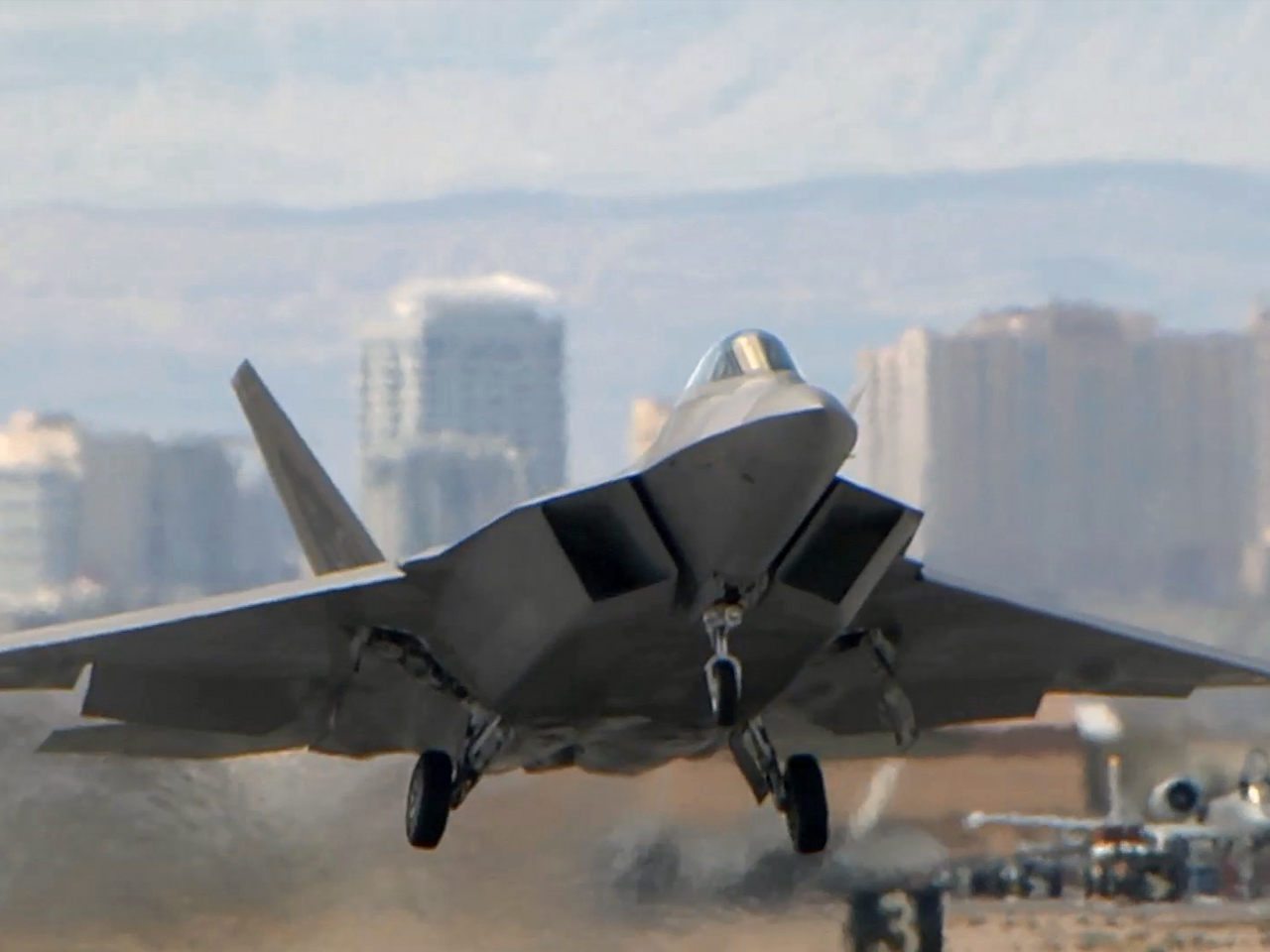 (AP) KADENA AIR BASE, Japan -- Years before F-22 pilots began getting dizzy in the cockpit, before one struggled to breathe as he tried to pull out of a fatal crash, before two more went on television to say the plane was so unsafe they refused to fly it, a small circle of U.S. Air Force experts knew something was wrong with the prized stealth fighter jet.

Coughing among pilots and fears that contaminants were leaking into their breathing apparatus led the experts to suspect flaws in the oxygen-supply system of the F-22 Raptor, especially in extreme high-altitude conditions in which the $190 million aircraft is without equal. They formed a working group a decade ago to deal with the problem, creating an informal but unique brain trust.

Internal documents and emails obtained by The Associated Press show they proposed a range of solutions by 2005, including adjustments to the flow of oxygen into pilot's masks. But that key recommendation was rejected by military officials reluctant to add costs to a program that was already well over budget.

"This initiative has not been funded,'' read the minutes of their final meeting in 2007.

Minutes of the working group's meetings, PowerPoint presentations and emails among its members reveal a missed opportunity for the Air Force to improve pilot safety in the 187-plane F-22 fleet before a series of high-profile problems damaged the image of an aircraft that was already being assailed in Congress as too costly. Its production was halted last spring and the aircraft has never been used in combat.

Among the problems reported after the working group's warnings:

Two years later, the oxygen system contributed to a fatal crash. Though pilot error ultimately was deemed to be the cause, the fleet was grounded for four months in 2011. New restrictions were imposed in May, after two F-22 pilots went on the CBS program "60 Minutes'' to express their continued misgivings.

The Air Force says the F-22 is safe to fly a dozen of the jets began a six-month deployment to Japan in July but flight restrictions that remain in place will keep it out of the high-altitude situations where pilots' breathing is under the most stress.

"60 Minutes" correspondent Steve Kroft reported on the F-22's problems in May. To see the report, click on the video at left.

One of the working group's proposed fixes, a backup oxygen system, is expected to be in place by the end of the year. And the Air Force, which blamed the oxygen shortage on a faulty valve in the pilots' vests, says a fix to that problem is also in the works. The working group also proposed changes in warning systems to alert pilots to system failures and urged enhanced tracking of potential health hazards to pilots and ground crew caused by the materials used to bolster the aircraft's stealth two more issues the Air Force investigations would later focus on.

More broadly, the Air Force now concedes that, while its own experts were tackling the F-22's issues, it was too aggressive in cutting back on life-support programs intended to ensure pilots' safety. It is now in the process of rebuilding them.

The F-22's gradual return to regular flight operations follows an exhaustive investigation over the past year by the Air Force, NASA, experts from Lockheed Martin, which produces the aircraft, and other industry officials.

But the documents obtained by AP show many of the concerns raised in that investigation had already been outlined by the working group that was formed in 2002, when the fighter was still in its early production and delivery stage.

It called itself RAW-G, for Raptor Aeromedical Working Group, and brought together dozens of experts in life support, avionics, physiology and systems safety, along with F-22 aircrew and maintainers.

The group was founded by members of the F-22 community who were concerned about how the unique demands of the aircraft could affect pilots. The fighter can evade radar and fly faster than sound without using afterburners, capabilities unmatched by any other country. It also flies higher than its predecessors and has a self-contained oxygen generation system to protect pilots from chemical or biological attack.

According to the Air Force, RAW-G was created at the suggestion of Daniel Wyman, then a flight surgeon on Florida's Tyndall Air Force Base, where the first F-22 squadron was being deployed. Wyman is now a brigadier general and the Air Combat Command surgeon general.

By the time RAW-G got going, some pilots were already experiencing a problem called "Raptor cough'' fits of chest pain and coughing dating back to 2000 that stem from the collapse of overworked air sacs in the lungs.

The group concluded that the F-22's On-Board Oxygen Generation System or OBOGS was giving pilots too much oxygen, causing the coughing. The more often and higher the pilots flew after being oxygen-saturated, group members believed, the more vulnerable pilots affected by the condition would be to other physiological incidents.

RAW-G recommended more tests and that the F-22's oxygen delivery system be adjusted through a digital controller and a software upgrade.

"The schedule would provide less oxygen at lower altitudes than the current schedule, which has been known to cause problems with delayed ear blocks and acceleration atelectasis,'' the technical term for the condition that leads to the coughing, according to the minutes from RAW-G's final meeting.

RAW-G members had spent two years pushing for the change in the oxygen schedule the amount of oxygen pumped into pilots' life-support systems but the necessary software upgrade never came through.

"The cost was considered prohibitive in light of other items that people wanted funded for the F-22,'' said Kevin Divers, a former Air Force physiologist who spearheaded RAW-G until he left the service in 2007 and the group disbanded.

Divers believes the cost would have been about $100,000 per aircraft.

The link between oxygen saturation at lower altitudes and the recent spate of hypoxia-like incidents at high altitudes remains a matter of debate, and it is likely that there are other contributing factors. Both the Air Force and the NASA, however, now concur that the F-22's oxygen schedule needs to be revised.

At a House subcommittee hearing this month, Clinton Cragg, the chief engineer for NASA's Engineering and Safety Center, said the current schedules provide too much oxygen at lower altitudes as RAW-G warned and also agreed with RAW-G that testing was insufficient "even back to the beginning of the program.''

Lt. Col. Tadd Sholtis, a spokesman for the Air Combat Command at Virginia's Langley-Eustis Air Force Base, the home base for the F-22s deployed in Japan, said the RAW-G group was not meant to last indefinitely. He said it was set up to help officials at Tyndall get up to speed on the medical aspects of flying the F-22, and disbanded "after several meetings and a safe transition to regular F-22 operations at Tyndall.''

But even in the last days of the group, its members were identifying more work that needed to be done. In an email to Divers before RAW-G's final meeting, Wyman said health hazards for F-22 pilots and ground crew needed more study.

"I am interested in the potential physiologic/health issues related to flying and fixing the F-22s,'' he wrote. He added that increased gravitational forces during accelerated turns, high speeds and high altitudes, noise and the "low observable'' materials used to give the aircraft its stealth qualities "might lead to new health issues.''

By then, the F-22 was just one of the aircraft RAW-G was concerned with. Minutes from the final meeting include "action items'' identifying potential issues with the F-35 and the CV-22 Osprey, and a suggestion that RAW-G's work be carried on with higher-level oversight so that it would have more clout. But after Divers left the service, no one took up the torch.

The Air Force says it believes improvements now being put into place make the planes safe to fly under limited restrictions. It is now refitting all pilot life support gear, redesigning the vests so that modified versions can be introduced in the fall, and adding the automated backup oxygen system in the cockpit by the end of the year.

In the meantime, the F-22s in Japan must fly under 44,000 feet so that the flawed vests will not be required, and are on a 30-minute "tether,'' meaning they must be within 30 minutes of an emergency landing site.

"While we cannot eliminate risk from flight operations, we are confident the F-22 is safe now and on a path to being as safe as any other fighter we fly,'' Sholtis said.

The Air Force says there have been no breathing-related incidents in the F-22 fleet since March 8, though the aircraft has marked more than 9,000 sorties, or 12,000 flight hours, since then.

"We won't ever bury anything if there are issues, but so far, none,'' said Brig. Gen. Matthew Molloy, an F-22 pilot and commander of the 18th Wing on Japan's Kadena Air Base. "This airplane is absolutely vital to our national security.''

The F-22's woes have been especially troubling for the Air Force because it is in many ways its showcase aircraft and its most controversial. At $190 million apiece, not counting development costs, it was lambasted in Congress as an overpriced luxury item not suited to current conflicts.

But the flurry of investigations into its safety problems have also revealed a more fundamental issue within the Air Force itself: decades of budget-cutting and outsourcing that severely compromised its expertise on what kinds of physiological problems pilots might face when flying in the extremely demanding conditions posed by its most advanced aircraft.

"Over the past 20 years, the capabilities and expertise of the USAF to perform the critical function of Human Systems Integration have become insufficient,'' Gregory Martin, who led the study into its oxygen problems for the Air Force Scientific Advisory Board investigation that began in 2011, told the House subcommittee.

Martin said the program's decline cost the Air Force expertise on life support systems, altitude physiology and pilot health and safety. He said that was compounded by "inadequate research, knowledge, and experience for the unique operating environment of the F-22.''

Maj. Gen. Charles Lyon, the Air Combat Command's director of operations, concurred with those conclusions at a news conference last month. "We probably overshot the mark on how much downsizing we did in this study of physiology,'' he said.

Divers considers the demise of RAW-G to be emblematic of that decline.

"The RAW-G became a brain trust, for sure, and it pushed various things that otherwise would have been completely ignored or not even brought up as an issue,'' Divers said. "All of that died in 2007."