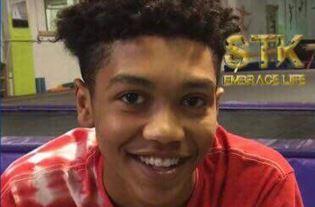 EAST PITTSBURGH, Pa. -- A police officer fatally shot an unarmed 17-year-old boy just seconds after he fled from a traffic stop in a confrontation partly captured on video from a nearby home. The teen has been identified as Antwon Rose, reports CBS Pittsburgh.

Police say the car stopped Tuesday night in the town of East Pittsburgh, Pennsylvania, matched the description of a vehicle being sought in a nonfatal shooting in a nearby town. Police had been searching for a car that fled the scene where a 22-year-old victim had been wounded in the abdomen during a drive-by shooting, reports CBS Pittsburgh. The victim in that shooting also returned fire.

Police spotted what they believed was the same car in East Pittsburgh less than 15 minutes later. The car had bullet holes in the rear windows, the station reports.

East Pittsburgh police pulled over the car, and while the driver was being detained, two passengers ran from the car, including Rose.

A East Pittsburgh officer opened fire and Rose was struck by multiple rounds. A report from the medical examiner confirmed that Rose had died at a local hospital but did not say where he was struck or the cause of death.

Police found two semi-automatic handguns inside the vehicle, but none on Rose. No shots were fired at the officers during the encounter.

The video captured the sound of what appeared to be three gunshots as two people bolted from the car past the side of a home and disappeared from view.

"Why are they shooting at him?" a woman can be heard saying in the video.

Debra Jones told The Associated Press her voice is the one caught on the video.

Jones, 53, said she was sitting on the porch of the home she shares with her daughter when the traffic stop began. She said the officer drew his gun as he talked to the driver, and she instinctively took cover.

"I fell off my seat and started to crawl into my house. But I turned and said, 'No, someone needs to keep an eye on this,' and I came out to watch the stop," Jones said.

When the two passengers took off, "that officer didn't try to chase them or taze them. He just shot that boy for running," she said. "I looked out my kitchen window and they were putting him in handcuffs. He wasn't moving. I think that boy died right there on the side of my house."

County police were called in to conduct an independent investigation, which is standard procedure, McDonough said.

McDonough noted there are circumstances when Pennsylvania law permits officers to use lethal force on a fleeing suspect. It's allowed to prevent death or serious injury to an officer or another person or if the fleeing suspect has used or threatened violence or possesses a lethal weapon.

The shooting has prompted outrage in the community.

Rose was a student in the Woodland Hills School District.

"The Woodland Hills School District acknowledges the gun violence that occurred recently within the neighborhoods that our district serves," the district said in a statement released to CBS Pittsburgh. "We are urging the communities to help us call a ceasefire to end this gun violence to keep our community safe for our children.

The driver of the vehicle, a 20-year-old man, was taken into custody and released after McDonough said officers did not feel they had cause to charge him in the earlier shooting. The other passenger who fled is still being sought. McDonough wouldn't say who was believed to be the gunman in the original shooting but said he was "very confident" the vehicle pulled over was the one involved.

An interview with the officer hasn't yet been conducted but he's on administrative leave pending an investigation.