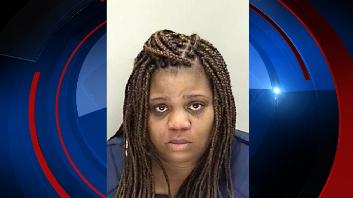 AUGUSTA, Ga. -- A Georgia woman is accused of locking her 13-year-old son out of the house overnight as punishment for missing his curfew, leaving him to sleep on the concrete patio in the backyard.

Antonia Folsom was arrested May 26 on a charge of deprivation of a minor, according to an incident report from the Richmond County Sheriff's Office.

Folsom didn't immediately return a phone message left Wednesday at the number listed for her in the report.

Folsom's son told a sheriff's deputy that he had returned home after his 9 p.m. curfew the night before and found the doors locked. His mother came to the door and told him she was tired of him coming home late and that he should find somewhere else to go, the teen told the deputy.

The teen's 15-year-old brother gave him a pillow and blanket without their mother's permission. The teen said he continued to knock on the door but got no response and had to sleep on the backyard patio.

According to CBS affiliate WRDW, the incident report also says the older brother told deputies his sibliing was having trouble breathing and that Antonia Folsom replied, "Now you know how I feel," and did not allow him in.

Folsom left for work the next morning and told her older son not to let his brother inside, the report says.

The deputy spoke to Folsom that day when she returned home at about 3:15 p.m., and says Folsom claimed her son didn't return home by curfew and that she didn't know where he was. Police said Folsom also claimed she hadn't spoken to her son but did see him walking around in the yard the night before.

In a written statement, she said she saw her son kick a trash can around 11 p.m. the night before and told him to come inside but that he ignored her and left.

Folsom was arrested and booked into the county jail. She was released May 28 after posting $1,300 bond.

Folsom's children were turned over to their grandmother.