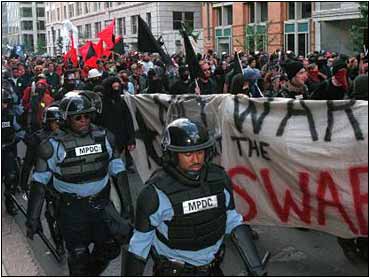 One of the largest demonstrations was in Washington, where several thousand demonstrators sang songs, waved giant puppets and banged drums as they called for peace.

"Now is when you should question the president," said Scott Morschhauser, 37, who came from Bettendorf, Iowa with a large American flag, its field of stars replaced with a peace symbol. "At times of emergency the decisions made have repercussions 10 or 20 years from now."

The peace rally and march had a festive atmosphere, with families spreading out picnic blankets in a park and performers leading the crowd in songs with lyrics such as "No more killing, no more war, no more violence anymore."

The police presence was muted, unlike Saturday when scores of officers turned out in riot gear for two separate marches of several thousand demonstrators. Those events were mostly peaceful, but some skirmishes led to several arrests.

The city's top two police officials walked ahead of the march Sunday, including Assistant Police Chief Terrance Gainer, who had been injured at a protest the previous day when someone hit him on the head and he was doused with pepper spray. He said he may have accidentally been sprayed by his own officers.

A lone counterdemonstrator drew angry words from protesters as he walked in front of the march with a sign comparing the anti-war demonstrators with Osama bin Laden, the government's prime suspect in the Sept. 11 terrorist attacks.

During the march through residential neighborhoods, the protesters chanted "peace now" and some held American flags alongside signs denouncing war.

"We're here to honor and mourn the victims of the violent attacks," said Maria Ramos, coordinator of the Washington Peace Center, which helped organize the march. "Calling a criminal act an act of war gives it too much dignity."

To Honor Your Country