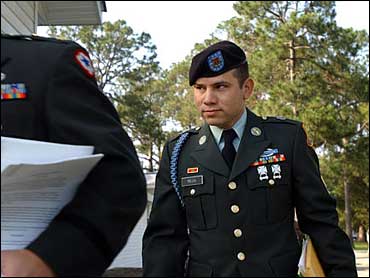 A military jury convicted a U.S. soldier Friday of desertion for leaving his combat unit in Iraq in protest of the war.

Staff Sgt. Camilo Mejia of the Florida National Guard was found guilty by a jury of four officers and four enlisted soldiers. He faces up to a year in jail and a bad conduct discharge and was to be sentenced Friday afternoon.

Mejia testified Thursday that he disobeyed orders to return to his unit after a furlough because he planned to seek status as a conscientious objector.

He said he also believed he should have been discharged under a National Guard regulation limiting service of non-U.S. citizens to eight years.

Mejia, a citizen of Costa Rica and Nicaragua, served for nine years.

Mejia said he became upset after seeing civilians hit by gunfire and watching an Iraqi boy die after confusion over which military doctor should treat him.

"The defense says he accomplished all his missions. Except the most important one — showing up," lead prosecutor Capt. A.J. Balbo said in closing arguments.

"This case clearly is about what was in the accused's mind," Font said. "He had an honest and reasonable view that because he had become a conscientious objector, he would not be required to serve in Iraq anymore."

Mejia, 28, was missing from the Army for five months before turning himself in.

Mejia's application to be an objector is being considered separately from his court-martial on the desertion charge.

In his objector application, he also claims he saw Iraqi prisoners treated cruelly when he was put in charge of processing detainees last May at al-Assad, an Iraqi air base occupied by U.S. forces.