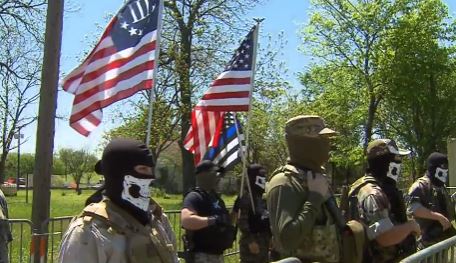 DALLAS- A tense, armed protest in front of a South Dallas mosque had police out in force Saturday afternoon.

It happened in front of the Nation of Islam mosque, reports CBS Dallas.

Anti-Muslim demonstrators, dressed in fatigues and masks and most of them armed, were easily outnumbered approximately 10 to 1 by the mosque supporters, some of whom were also armed.

Mosque supporter Purlie Gates was very upset about the protest.

"These people came to our community under false pretenses. Could we do the same thing? Could we make some allegations about a group in Highland Park and arm a militia and say we are going to go over there with arms and protest? That would have been stopped at city hall. The police would have stopped that," said Gates.

Dozens of police officers stood in between the two groups and also perched on rooftops to ensure nothing more than verbal jabs were exchanged.

In a statement released before the protest, the Dallas Police Departmentsaid, "The department is committed to protecting the Constitutional rights of all citizens and will make every effort to keep this protest peaceful."

The was no violence and no arrests.