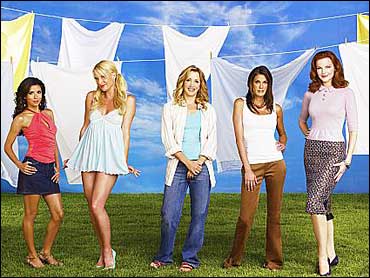 Marriage gets little respect on network TV shows that instead revel in the pleasures of extramarital and even kinky sex, according to a study released Tuesday.

The study by the Parents Television Council includes a strongly worded condemnation of primetime TV, contending it "seems to be actively seeking to undermine marriage by consistently painting it in a negative light."

Even more troubling, according to the watchdog group, is what it characterized as TV's recent obsession with what it termed "outre" or bizarre behavior, including partner swapping and pedophilia.

As for references to pornography, sex toys and "kinky" behavior, those are now common on TV, the report said. Visual references to practices such as voyeurism and sadomasochistic sex outnumbered married-sex references by a ratio approaching 3 to 1.

The effect on young viewers is dire, the Parents Television Council contends.

Behavior that once was seen as "fringe, immoral or socially destructive have been given the imprimatur of acceptability by the television industry" and children are absorbing or even imitating it, the report contends.

Parents don't necessarily have the tools to identify programs they may want to block via the V-chip, according to the study: It says designations such as "S," signaling sexual content, were applied inconsistently and inaccurately.

ABC, CBS, CW, Fox and NBC, the networks in the study, all declined comment.

Photos: A Peek At Fall TV

James Steyer, CEO of nonprofit Common Sense Media, which helps parents sift through media offerings to decide what's right for their children, said he couldn't vouch for the Parents Television Council's research but lauded the effort.

While the council takes a very traditional view of society and pop culture, "I respect it," Steyer said Tuesday. "There are millions of Americans that feel this way," he said.

It's legitimate to scrutinize TV's take on marriage and sexuality given its influence on children, Steyer said.

But TV Watch, a nonpartisan coalition that counts networks among its members and argues that individuals and not government should decide what's seen, fired a volley at the council.

"The Parents Television Council won't be satisfied with television content until they convince the government to enforce their personal, selective judgments," Jim Dyke, executive director of TV Watch, said in a statement.

The study analyzed four weeks of scripted shows on the major networks at the start of the 2007-08 season, noting content including depictions of sex; implied sex; discussions on the subject, and visual references to strippers, pornography and other aspects of sexuality.

Among the networks overall, references to adultery outnumbered references to marital sex by 2 to 1. The "family hour" - the first hour of prime-time TV, which draws the most young viewers - contained the highest ratio of references to non-married vs. married sex, the study found.

Shows held up as containing bad examples of TV behavior included "Grey's Anatomy," with the report citing a scene with singles Meredith and Derek in bed, and "Boston Legal," for an exchange about prostitution.

"Desperate Housewives" was singled out for a bedroom scene involving Gabrielle and Carlos, who divorced and then, while in other relationships, had sex.

Some shows have better attitudes toward marriage although they're not necessarily appropriate for families with young children, said Tim Winter, council president.

The drama "Friday Night Lights" is "better than most in showing positive portrayals of marital relations and intimacy," he said in a telephone conference, while the sitcom "Everybody Hates Chris" depicts a strong married relationship.