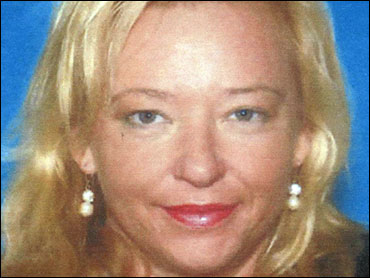 (AP Photo/Pima County Sheriff)
Shawna Forde, 41, is accused of murdering a Hispanic father and daughter, part of a robbery to raise money for an anti-illegal immigration cause.

PHOENIX (CBS/AP) Anti-illegal immigration "extremists" murdered a Hispanic father and his 9-year-old daughter and gravely injured the man's wife in order to raise money for their cause, say Arizona police.

Jason Eugene Bush, 34, Shawna Forde, 41, and Albert Robert Gaxiola, 42, have been charged with two counts each of first-degree murder and other charges, said Sheriff Clarence Dupnik of Pima County, Arizona.

The trio is alleged to have disguised themselves as law enforcement officers, forced their way into a home in rural Arivaca on May 30, and shot and killed Raul Junior Flores, 29, and his daughter Brisenia Flores, 9. Raul Flores' wife obtained a gun and fired back, hitting Bush. The wife was also wounded, according to police. Her name is not being released at this time.

Their motive was financial, police say. They sought a large sum of money to fuel their anti-illegal immigration operations.

"The husband who was murdered has a history of being involved in narcotics and there was an anticipation that there would be a considerable amount of cash at this location as well as the possibility of drugs," Dupnik said.

Forde is the leader of Minutemen American Defense, a small border watch group, and Bush goes by the nickname "Gunny" and is its operations director, according to the group's Web site. She was once associated with the better known and larger Minuteman Civil Defense Corps.

A statement attributed to officers of Forde's group and of posted on its Web site on Saturday extended condolences to the victims' families and said the group doesn't condone such acts and will cooperate with law enforcement.

"This is not what Minutemen do," said member Chuck Stonex, who responded to an e-mail from The Associated Press sent through the Web site. "Minutemen observe, document and report. This is nothing more than a cold-hearted criminal act, and that is all we want to say."

The assailants planned to leave no one alive, Dupnik said at a press conference in Tucson on Friday. He said Forde was the ringleader. 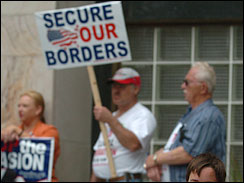 (AP Photo/The Bellingham Herald)
Shawna Forde, with others, at a 2006 protest.

"This was a planned home invasion where the plan was to kill all the people inside this trailer so there would be no witnesses," Dupnik said. "To just kill a 9-year-old girl because she might be a potential witness to me is just one of the most despicable acts that I have heard of."

Forde denied involvement as she was led from sheriff's headquarters.

Gaxiola also denied involvement; Bush was arrested at a Kingman, Arizona, hospital where he was being treated for a leg wound he allegedly received when the woman who survived the attack managed to get a gun and fire back.

Forde is well known in the anti-illegal immigration community, said Brian Levin, director of the Center for the Study of Hate and Extremism at California State University-San Bernardino.

"She's someone who even within the anti-immigration movement has been labeled as unstable," Levin said. "She was basically forced out of another anti-immigrant group, the Minuteman Civil Defense Corps, and then founded her own organization."

Stonex said he met Forde while on an Arizona border watch operation last fall, and liked her despite her reputation in the Minutemen community.

"I know she's always had sort of a checkered past but I take people for what I see and not what I hear," the 57-year-old said.

She recruited him to start a new chapter in New Mexico, where he lives, but was secretive about her group and its members. Stonex said he didn't know how to recruit for a chapter and never did.

He said Forde called him on the day of the attack while he was visiting Arizona and asked him to bring bandages to an Arivaca home because Bush had been wounded. Stonex said it appeared Bush had a relatively minor gunshot wound, which he treated.

He said Forde and Bush told him Bush been wounded by a smuggler who shot at him while the group were patrolling the desert.

Stonex said he didn't suspect that might not be the case until he was contacted by a deputy on Saturday about their alleged involvement in the crime.