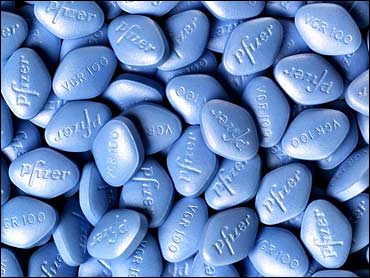 Athletes looking for a performance boost appear to be turning to a little blue pill more usually taken for its off-the-field benefits: Viagra.

But experts are divided over whether it actually offers athletes an edge.

Some sports authorities say the drug is now finding a following among athletes. It isn't clear how many might be taking it in hopes of improving athletic performance.

It also has attracted the attention of the World Anti-Doping Agency. The agency is studying Viagra's effects in athletes, but hasn't yet banned it. Viagra is not on the International Olympic Committee's list of prohibited drugs, so athletes can take it at the Beijing Olympics.

Viagra, also known as sildenafil, is manufactured by Pfizer Inc. It originally was developed as a heart drug; its use as a treatment for erectile dysfunction was accidentally discovered.

The drug works by increasing the effects of nitric oxide, which makes blood vessels expand. That should theoretically allow blood cells to get more oxygen from the lungs. It also might improve heart function.

Viagra also is approved to treat pulmonary hypertension, a condition in which the lungs' blood vessels tighten. Doctors have used the drug experimentally to treat pregnant women with high blood pressure and to ward off jet lag.

But whether Viagra makes athletes faster, higher or stronger is uncertain.

"Just because you have more nitric oxide doesn't mean that you are going to be a better athlete," said Anthony Butch, director of the Olympic Analytical laboratory at UCLA. "If you have all the nitric oxide you need, and if you generate more from Viagra, it's not clear what effect that would have."

Still, some preliminary studies have shown that cyclists taking Viagra improved their performances by up to 40 percent.

"If you have more oxygen going to your muscles, that's more energy and that makes you a better athlete," said Dr. Andrew McCullough, a sexual health expert at the New York University School of Medicine. "Even if it only gives you a 10 percent increase, in peak athletes that is enough to win."

McCullough said Viagra is only likely to help athletes such as runners, cyclists or skiers - sports where endurance and speed are key. Viagra does not work directly on muscles, so will not make athletes stronger.

Athletes often mistakenly assume a drug will work in their bodies the same way it does in sick people. For instance, in people with lung problems who take Viagra, the drug widens their blood vessels so they can absorb more oxygen.

Athletes taking Viagra might hope the drug would expand their already normal-sized vessels to give them extra lung capacity. But some experts say that's unlikely.

"Viagra corrects problems in people who are in a challenged or diseased state," said Ian McGrath, a professor of physiology at the University of Glasgow.

In normal people, McGrath said, the body's own regulating system is not so easily superseded by drugs, and taking Viagra might be useless. But McGrath also said taking Viagra theoretically could help people breathe better in heavily polluted cities, such as Beijing.

"If you have some sort of illness from pollution, then Viagra might help," he said.

"We see it as much as we see ibuprofen or aspirin or antibiotics that are not prohibited," said Christiane Ayotte, director of a WADA-accredited laboratory in Canada. "Athletes may be taking it, but they may be taking it for non-doping purposes."

Ayotte thinks it would be unrealistic to ban Viagra.

"Are athletes going to have to submit therapeutic-use exemptions for Viagra?" she asked. "That would be quite humiliating."

Other doctors hypothesized that Viagra's more well-known effects on men's sex lives might be the ultimate explanation for any enhanced athletic abilities.

"It could be that athletes are taking Viagra and then having vigorous sexual activity," said Dr. Gerard Varlotta, director of sports rehabilitation at New York University's Rusk Institute of Rehabilitation Medicine. Varlotta doubted that Viagra itself could improve an athlete's performance.

"If athletes are euphoric after sex after taking Viagra, they may be euphoric about their athletic endeavors," Varlotta said. "That may make them a better athlete."