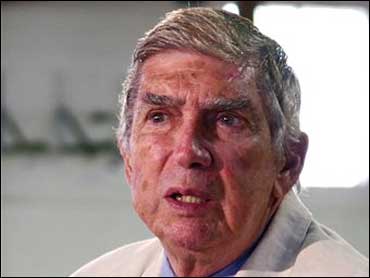 Authorities building an immigration case against anti-Castro militant Luis Posada Carriles have filed an FBI document with the court that provides new details about Posada's purported links to a wave of 1997 bombings in Havana.

The document, based on interviews conducted in the late 1990s with confidential sources, says Posada frequently met with two men who ran a Guatemalan utility company and indicates the bombings may have been planned there.

A source told the FBI that a company employee discovered bottles labeled "high-powered explosives" in a closet. With them was a note in Spanish: "The tyrant has to be eliminated, regardless of how many others are killed."

The document was filed as part of the immigration case against Posada, a 79-year-old former CIA operative accused of plotting the deadly 1976 bombing of a Cuban airliner. He is set to stand trial next week in Texas on allegations that he lied to immigration authorities while trying to become a naturalized U.S. citizen.

Posada, a fierce opponent of Castro, is wanted in Cuba and Venezuela to face trial — but the U.S. has refused to send him to either country.

The FBI document reveals details about the U.S. investigation into links between Posada and the Havana bombings. The probe — which was mostly dormant until Posada's return to the United States in 2005 — could provide an avenue for him to be charged in connection with the bombings.

The document focuses on interviews conducted with confidential sources involved in the utility company, where two men associated with Posada were principals.

One of the sources said the men spoke about plans to assassinate Castro, and he began to suspect they were involved in "illicit activities." He had a listening device placed in one of the company's offices, the document says.

That device revealed discussions about smuggling a "putty-like explosive" into Cuba in the shoes of people posing as tourists, the FBI document said.

The source also told the FBI that another employee of the utility company found 22 plastic tubes in a closet in August 1997 labeled "high-powered explosives, extremely dangerous." The employee also discovered that the explosives were being mixed into shampoo bottles. The note pad with Posada's name and the Spanish note were found in a carrying case, the source said.

The confidential source also provided the FBI with a fax discussing wire transfers from individuals in New Jersey that was signed "Solo," which the FBI believes is one of Posada's aliases. As part of the Havana bombing investigation, the FBI concluded that at least $19,000 in wire transfers were sent from the United States to El Salvador and Guatemala to a "Ramon Medina."

Posada possessed a Salvadoran passport with the "Medina" name and also used that alias when he was involved in the 1980s Iran-Contra operation headed by then-Lt. Col. Oliver North, according to court documents.

The fax signed by "Solo" included a recent newspaper article about the 1997 bombings and says that more publicity must be generated about the anti-Castro campaign. "Like I explained to you, if there is no publicity the work is useless," the fax says.

The federal investigation into the Havana bombings is continuing, but Posada has not been charged. It primarily focuses on finances for the attacks believed to have been sent by Cuban-American associates in New Jersey.

In 1998, Posada admitted his role in the Havana bombings in a series of articles published by The New York Times, and also told other news outlets that he granted the interviews to "generate publicity for his bombing campaign against Cuba's tourist industry and to frighten away tourists," the FBI document says.

Posada later denied making the statements, and his attorneys have repeatedly declared his innocence in the bombings as well as the airliner bombing in 1976. Posada's lead attorney in the Texas case, Arturo Hernandez of Miami, did not immediately respond Friday to phone and e-mail messages seeking comment.

Posada was released on $350,000 bail in the Texas case. He is living with his wife in a Miami suburb under virtual house arrest.