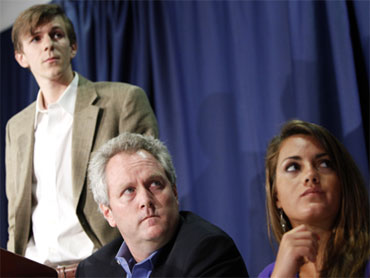 The new videotape shows filmmakers Hannah Giles and James O'Keefe, posing as a prostitute and her boyfriend, soliciting advice about a possible housing loan from workers in the Philadelphia office of ACORN Housing Corp.

Previous videos showed the same pair, also posing as a prostitute and her boyfriend, visiting ACORN offices in other cities.

The Philadelphia visit is significant because of a dispute over statements ACORN has made defending what took place when Giles and O'Keefe visited the Philadelphia office last summer.

Supporters of O'Keefe and Giles said ACORN has lied about whether the two were thrown out of the Philadelphia office, how much time they spent there and whether they explicitly told ACORN workers that Giles was a prostitute.

At a Washington news conference, O'Keefe went through an edited version of what he said was a 32-minute visit to the Philadelphia office.

"At no point were we kicked out, at no time were we asked to leave," O'Keefe says on the tape of the Philadelphia visit.

Neil Herrmann, ACORN's lead organizer in Philadelphia, was quoted in news accounts last month as saying that an employee at the office had asked O'Keefe and Giles to leave. On the edited tape released Wednesday, the couple were not asked to leave.

ACORN spokesman Brian Kettenring said in an e-mailed statement: "We've always been clear about Philadelphia. We got them out of the office as quickly as possible, and filed a police report on them within minutes."

Kettenring said that ACORN's political enemies are trying to keep the controversy alive.

"In this era of journalism-lite, plenty media are willing to oblige," said Kettenring.

In the video, the voice of the ACORN employee was muted for legal reasons. ACORN is suing O'Keefe and Giles and conservative columnist Andrew Breitbart, who posted the videos on his Web site.

After Tuesday's news conference, O'Keefe called on ACORN to state publicly that it has no objection to the public release of any its employees' oral statements on the latest tape.

ACORN has repeatedly asked that O'Keefe release all of the tapes he possesses unedited.

ACORN, short for the Association of Community Organizations for Reform Now, portrays itself as a successful advocate for tens of thousands of low-income and minority homebuyers. Republicans describe it as a pro-Democratic group that among other things, is violating the tax-exempt status of some of its affiliates by engaging in partisan political activities.

Some of the previously released videos show ACORN employees giving O'Keefe and Giles advice on how to disguise the source of their income to get housing aid. In some videos, the ACORN employees are visited by the make-believe hooker and her boyfriend seeking advice about establishing a brothel with underage hookers.

The release of the videotapes has resulted in the cutoff of some federal funding to ACORN and increased pressure on the community activist group, which faces federal investigations and accusations of voter fraud. Conservatives have tried to make the group a symbol of Democrats' excesses and government waste.

According to a transcript they released on the videotape of the Philadelphia visit, O'Keefe and Giles start referring to prostitution, with the ACORN employee in response coming across as at times unconcerned, at others anxious to end the meeting.

"A lot of organizations won't give us the clear go ahead because of who she, I .... you know like what she does for a living," O'Keefe says of Giles, according to the videotape.

In the transcript, the ACORN employee responds by offering the two a flyer about an upcoming workshop on housing.

"Your line of work it's really ... as long as you can prove that you have income steadily coming in," says the ACORN employee, according to the transcript.

At the news conference, Rep. Steve King, R-Iowa, spoke out on behalf of O'Keefe and Giles, saying that ACORN is a corrupt, criminal enterprise and that he has been trying for four or five years to get Congress to stop funding it.

Ginni Thomas to speak to House Jan. 6 committee this week
Thanks for reading CBS NEWS.
Create your free account or log in
for more features.
View CBS News In
CBS News App Open
Chrome Safari Continue
Be the first to know
Get browser notifications for breaking news, live events, and exclusive reporting.